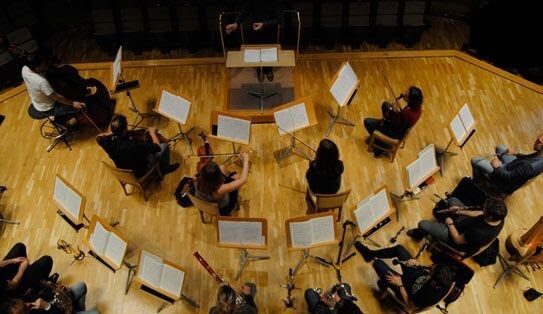 Canal Theaters They present the tenth edition of the Festival ENSEMBLES, a sample of the best contemporary music of our country which can be enjoyed day 6, 13 Y 20 October in the Green Room.

6 October: Chamber Orchestra Auditorio de Zaragoza (Enigma group)
Snapshot(s) sonora(s)
The term "instant / a" can mean something ephemeral nature, which lasts an instant, or also that which it is immortalized by a photographic printing. Both definitions serve to illustrate the nature of this program.
Six -five compositions releases them absolute- which represent a sort of snapshot of the situation of contemporary composition in Spain; six authors from different generations and backgrounds, with equally diverse sound proposals.
each composition, It is a single snapshot of the sound imagery of each creator / a, but also, It is a part of that collective sound image, which it is this program, which is doomed to ephemeral, snapshot, musical performance.

13 October: modern ensemble (Barcelona)
Sound essentially the essence of sound ...
The program the Ensemble Modern Barcelona presents this concert, It represents the purest form of ensemble: seriously address the work and dissemination of works of composers reference, and serve as a platform that drives the careers of young talents in the field of music composition today.
The play Seq, Young Spanish composer Pablo Gómez Andoni Olabarría, born as a scan process and the contrast between contrast considered generators musical form. All it combined with a set of proportions that locates the temporal aspect in the foreground. The duo for flute and piano by composer Hèctor Parra, Andante Suspended, It is a dialogue where the flute is the engine that drives the work while the piano creates harmonic resonance spaces, paper is reversed towards the second section, where the percussive attacks in the low register of the piano structure a sharp and abrupt speech. In trio III, Lopez Lopez, the granular treatment material and the sound modulations generate temporary independent layers overlaying time and cohabit, distinguished between them thanks to the internal rhythm, harmony, Ringers or in its dynamics, and they characterized by the way they evolve. Subtlety and elegance advance from a particle least sound to the overall color, proposing a journey where each note, each sound, It is poetry and beauty. Hyphen, Philippe Hurel, It is based on a group of reasons that allow the violin and the cello are in a shared homorrítmica figure, or in a distributed loop between the two instrumentalists that blocks the development of speech. From the point of view tímbrico, the cords are treated so that the two instruments end up sounding like one. Memories of the Abyss V, para piano solo, composer Demian Moon, explores the limits of impossibility, Heartbreak, loneliness. Sound filter never becomes manifest in full, that is gradually transforming, unraveling, changing. A deep and complex music, with a virtuosic writing demands and leads to limit the instrumentalist. Units of-twist, the young Argentine composer Damian Gorandi, It is a work built with different units of noise at different scales, where the composer explores the connections and multiple interactions 'matter' in a continuous temporal flow. energy extreme contrasts, either in excess or total lack thereof, and sublimating narrative gestures, spaces and materials, that is as fragile as wild.