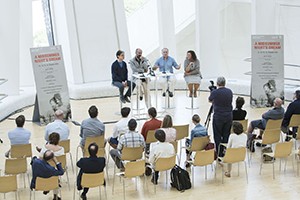 The Milanese master and Scottish director have appeared today at a press conference, along with the Mayor of Les Arts, Davide Livermore, to present the fourth new production arts center in Season 2015-2016.

It is about, in addition to the first work of the English composer, "One Genie S. XX "played by the Orquestra de la Comunitat Valenciana. "A score of ensemble cast and great theatrical force, It needs a solid artistic Mimbres to be represented ", He has clarified the Mayor.

In this sense, He explained that Les Arts brings together a cast of established values ​​of the English repertoire with emerging voices, Center artists Placido Domingo and children Choir of Our Lady of the Abandoned.

the soprano Nadine Sierra, Valencian whom the audience will remember for Don Pasquale under the direction of maestro Abbado himself in 2015, and the counter Christopher Lowrey, one of the new values ​​in their tessitura, They lead the cast as Tytania and Oberon, Kings fairies.

Roberto Abbado, conductor of the OCV, He stressed the innovative capacity of Britten with this work, introducing new elements as the relevance of figure contratenor, the role of children's choirs to extract a "non-human" and "magic" color and a mysterious orchestral sound. "It's a score with a lot of shades and colors, it is a pleasure to remove a director ", has added.

Paul Curran, stage-manager, set designer and choreographer of "A Midsummer Night's Dream" debuts at Les Arts with this production, which has wardrobe Gabriella Ingram and lighting David Jacques.

As he highlighted Livermore, Scottish director, multifaceted artist and recognized in major theaters in the world, It was, Besides, master of artistic director of Les Arts. The main difficulty for Curran Opera, as stage director, is its deal with 19 papers solo, "Where everyone is a star".

"A Midsummer Night's Dream also offers an incredible wealth to work" -has analyzed Curran- "Since it is the only opera based on Shakespeare that uses the actual text of the playwright without changing hardly anything".

Curran, as it has advanced, Ambienta the action of "A Midsummer Night's Dream" in the ruins of an old temple in which converge the three-dimensional fantasy Shakespeare. The director also, He highlighted the three themes on which work is based: politics, religion and sex. "I'll love", He has ruled the Scottish.

In addition the day 10, there will be more performances on 12, 14, 16 Y 18 of June, It is the day 16 soprano Jennifer O'Loughlin American who sings the role of the Fairy Queen.

Earlier this month June, He recalled Davide Livermore, the Aula Magistral hosts a dramatized reading of the Shakespearean classic, with functions for the public of courseware, the days 8 Y 9, and a representation for the general public on Saturday 11 June at 18.00 h. Les Arts presents a new own theatrical production, text adapted by Anselmo Alonso, and actors Farsería.

Parallel, students will analyze literary workshop 'from book to script', adaptation of the play, English playwright who wrote the end of S. XVI, the operatic language of S. XX in the works of Benjamin Britten.