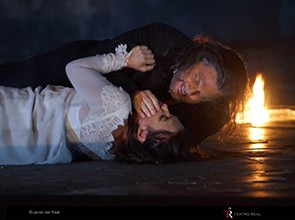 Among the proposals opera approach to all citizens, that drives the program of activities Bicentenary of the Royal Theatre, the dissemination of their shows with the help of new audiovisual technologies is a priority.

A) Yes, in the wake of the successful relay I puritani, last 4 of July, It has reached 20 millions of peoplein its various windows -webs, museums, auditoriums and squares of Spain and Latin America, social networks, etc.—, Royal Theatre again offering the possibility that Otello can be followed, live or deferred, for free, Worldwide, with the active participation of different cultural institutions, media and municipalities.

This time, Besides the live broadcast museum, cultural centers, town halls and auditoriums throughout Spain, They will be installed screens outside Madrid, in emblematic spaces of Granada, Murcia, Sevilla and Valladolid, bringing opera to the streets in a festive and relaxed atmosphere.

In Latin American countries retransmission day 24 September will be offered the 30 of September, Friday, in auditoriums Chile, Colombia, Mexico and Venezuela.

Likewise, from the Royal Theatre will retransmit the Opera live, open and for everyone, in stage Digital and other platforms online, National and international, which provide Otello in streaming a public increasingly diversified.

RTVE, co-producer of audiovisual production, Opera will offer on its website RTVE.es. The Opera Platform, Opera online platform tutored by OPERA EUROPA, which started its activity with the international relay La traviata from the Royal Theatre, in 2014, issue the first and last opera of the season: Otello Y Madama Butterfly. As well ARTS Concert, of the ChanelART, Y Shakespeare Lives, of the British Council, They will join the relay Otello.

COLLABORATION WITH THE BRITISH COUNCIL

As part of the commemorations of the fourth centenary of the death of William Shakespeare and the bicentennial of the founding of the Royal Theatre, Otello, linking the names of Verdi and Shakespeare, HE will broadcast live for 140 countries in the audiovisual platform Shakespeare Lives, on the websites of British Council centers worldwide, and in theaters such as the Shakespeare Theatre de Gdansk (Poland) or the Romania National Theatre.

Viewers will also enjoy, during intermission, a selection of short films current produced by acclaimed British directors and inspired by Shakespeare's classics with a contemporary look roundly. a series of also be offered interviews with artists Otello which can be followed on social networks Tagged #ShakespeareLives, in order to offer the public a multifaceted look of this masterpiece from different areas of creation.

narrow British Council collaboration with the Teatro Real will continue in the future with a series of projects covering the digital enterprise, the audiovisual sector and educación.'OTELLO '

free visit to the exhibition at the end of the colloquium.

Opera in the street. Live broadcast of Otello

Live broadcast of Otello for everyone in stage Digital and museums, cultural institutions, municipalities and squares throughout Spain.

Colloquium. Closing ceremony of the celebrations of the fourth centenary of William Shakespeare

Conference: The arrival of 'Otello' to Spain
Date to be determined