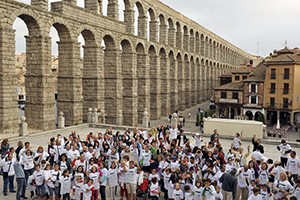 Of the 17 al 31 of July, he Festival Segovia (FS) again delight the audience after 40 years in which the best performers on the international scene have left their mark with unforgettable concerts. A Festival, endorsed by the 47 editions of his feature Chamber Music Week and the 21 its prestigious Festival Young, that integrate, bet big and young values ​​of the current music scene, with a program this year that delves into the roots of Spanish popular music, a hymn to the deepest verses of our culture, flamenco, always present in the FS, without forgetting the jazz, fusion music, choral music or dance. Everything that we live and dream in a present in constant motion that can not shake their memories or remain oblivious to their surroundings and to the evolution of its forms.

historical nooks and full of references where the acoustics are spectacular, as San Juan de los Caballeros Zuloaga Museum, Cathedral, Patio de Armas El Alcázar, large venues that host a large audience as the Plaza del Azoguejo or more gathered for a piano recital, as the Casino of the Union, They will dress gala to revive the public moments of enjoyment in a city born for living art.

Inaugurating the Festival, on Sunday 17 July the Cathedral will host the voices of Lexington Singers, directed since 18 years Jefferson Johnson, one of the most prestigious choirs of Kentucky and one of the oldest community choirs USA. Composed by 50 singers, Americans will perform spiritual and sacred music.

Directed by Andrew Gourlay, "One of the great emerging directors and artists of the future", as augured BBC Music Magazine, member Gustav Mahler Youth Orchestra to orders Claudio Abbado, and already with a path where operatic engagements overabundant, the Symphony Orchestra of Castilla and Leon, celebrating their 25 anniversary, will offer in the Plaza del Azoguejo (21 of July) a concert to heighten the mood: An American in Paris, from Gershwin; "Interlude" y "Danza" of the visual breve of Failure, and Symphony No. 3 in E flat major, on. 55 "Heroica", from Beethoven.

From flamenco, the great Carmen Linares, accompanied by the elegant piano Pablo Suárez, the swing of contrabass Josemi Garzón and the brilliant percussion Karo Sampela, will present "verse by verse" (22 July in El Alcázar): a project that shows the musical identity of the singer as the only voice of contemporary flamenco and his passion for poetry in Spanish to rediscover a repertoire of verses, reflections and songs of García Lorca, Miguel Hernandez Y Juan Ramon Jimenez. A recital of song and poetry where the musical dialogue between voice and instruments reveal the dimension of flamenco music as authentic and versatile. Born flamenco voice of Andalusia, the first loneliness, the first cry on the first night ...

After experimenting in his Lookingback project with the composer hunch Chopin, the breath of Renaissance and Baroque repertoires or song concert, Andreas Prittwitz, creator able to claim both musical excellences of Renaissance culture as improvised jazz, also it stirs the roots of flamenco to shake hands with the old and baroque music in a unique concert. And it is this virtuoso saxophonist, clarinetist and exclusive interpreter of the recorder has for years indulging distant repertoires to give them a new skin and new thinking. Here I am completely different "baroque Zambra" in Segovia with the musician joins two worlds, different times, different roots, different timbres and instruments coexist during this concert (29 July in El Alcázar). Chacona, bulería, Folio, tanguillo, Bach, soleá, Vivaldi, fandango, Henry Purcell and toná ... Eva Durán singing and Jorge Enrique García countertenor, Mario Montoya to touch and Ramiro Morales with the baroque guitar, and "conciliators" elements, Joan Espina and Andreas Prittwitz, violin and winds, all united by the contrabass Roberto Terron.

The lyrical song is an essential genre in and for Spanish culture is something that evidence the acclaimed Maria Jose Montiel, National Music Award 2015, one of the best mezzo-sopranos of our country, Segovia protagonist of "Velvet", a recital (23 July in El Alcázar) With which, with pianist Michael Estelrich, will tour the Spanish popular music as a sign of that sentimental spirit where he found the tribute to unrequited love or desired. Subjects of Failure, Turina, Granados, Villa Lobos, Ovalle, E. Halffter, A. Thomas, Debussy, Saint-Säens O R. Hahn make up the repertoire of this opera singer and recitalist-an international recognition of the great interpreters of Carmen today, role incarnated in more than 90 sometimes with great success- which he is capable of setting up an entire audience thanks to the perfection of his technique, its bright timbre, his musical and dramatic versatility and wide tessitura voice.

From jazz, Patricia Kraus He looks back on itself again through the songs that have accompanied her throughout her life. With an unmistakable personal style, and with a band of excellent international musicians, Segovia surrender to your voice thanks to a concert that will be including songs from their latest album ECOS and former DIVAZZ. A set of versions and own subjects impregnated with the harmonies of R&B, Jazz and Soul, They are offering such an intimate live as spectacular (30 July in the Garden of Zuloaga).

Between the Renaissance and Baroque, to Romanticism. 47 Camera Week

A different look for an audience that can also stroll through chamber music, why it defined for already 47 years FS, and which this year also bet on the music of the early seventeenth century, an eruption of musical expression, the time of the first operas Peri, Monteverdi Y Cavalli, and basso continuo, Sonata for solo and "virtuous", as Giovanni Antonio Pandolfi Mealli, one of the first composers of sonatas for violin, bassoon virtuoso as Bartolome de Selma and Salaverde, composers such as Diego Ortiz, Salamone Rossi, Aurelio Virgiliano, Jan Pieterszoon Sweelinck, the Italian Carlo Gesualdo or contemporary Michelangelo Rossi. All this hand Audi Alter (Maria Martinez Ayerza, recorders; Petri value, bassoon, baroque bassoon and recorders; Petros Paukkunen, organ), training created to promote one of the most innovative and valuable repertoire of the history of Western music: he Stylus Phantasticus. A style of instrumental music of the seventeenth century characterized by the use of a varied expressive palette, great contrasts and an unknown compositional freedom so far (25 July in the Cathedral).

Ignacio Prego, one of the most important of its generation clavecinistas, will delight the audience with a concert in which he will play the Goldberg variations from Bach (26 July in San Juan de los Caballeros). High degree of virtuosity, crossing hands and use of two keyboards. Fantasy and order for a concert an hour and a half of a technique that verges perfection and musical passion.

Trio Arriaga, Likewise, will hold thanks to the collaboration of Spanish Cultural Action (AC / E)- a tribute to Granados Y Shostakovich (27 July in San Juan de los Caballeros) in an intimate but no less splendid concert. Concerts in the best European festivals and accompanied the vast majority of Spanish orchestras and some of the best European, Trio Arriaga is the meeting point of three musicians of recognized standing and where paths converge their solísticas. More than 25 Albums, some labels like Sony NAXOS or, and multiple awards won, the guarantee as a trio of reference of his generation with an exquisite filling and beautiful sonority.

The word that wrote Cervantes to describe their women in their exemplary Novels, comedies and Don Quijote of La Mancha, illustrated guide and music originally composed to commemorate his figure in the fourth centenary of his death six composers from Spain and America, from the perspective of four centuries of historical distance, glossed singularities of some of the female characters created by Cervantes. On this issue in the musical cervantinas Women, Hand actor Manuel Galiana, the middle María Rodríguez Cusí Y Marisa Blanes the piano, directed by Luciano González Sarmiento. Women who try to be "masters" themselves, "Exemplary women" that are protected from hostility and social conventions and moral. Women vindicate her identity with a voice that becomes word and music (24 July in El Alcázar).

On another exciting woman, a revolutionary dance and life, Carmen Tórtola Valencia (1882-1955), admired by Valle Inclan, Perez de Ayala, Gomez de la Seine O D'Annunzio, Pirandello O Marta Graham, Clara will deepen the dancer Tortola Valencia Good, eternal woman. Turtledove is narrating his life with poetry of artists and intellectuals of the generation of 98 his art inspired, on a musical background of some of the compositions she danced and provide entry to their dances (28 July in San Juan de los Caballeros). Thus occupy dance, Likewise, a privileged place in the FS, also hand Uniqart Dance Company, neoclassical ballet company created by former dancers Béjart Ballet Lausanne Iker Murillo, Marsha Rodríguez and acclaimed Russian choreographer Vitali Sanfrokine. Part of his philosophy is condensed in its motto: "Creating art in unique locations" (31 July in the Garden of Zuloaga). And the statement submitted by the House of Dance of Logroño "Perpetuum mobile" of Josep Aznar It will make us dream moments in the hand of the international dance festivals visited us in summer. The file that these photographs, for dance, is the best legacy we always will witness the brilliant moments that dance offered in our country (From the 20 July at the College of Architects).

For young audiences accompanied by adults, the characteristic traditional Family Concert (24 July in San Juan de los Caballeros) It will focus on music and emotions to speak of love for music and teamwork, and supplemented with a small workshop tools and plastic creation. The mysterious artifact is a musical story in a written act Patricia García Sánchez in which sound tracks of Romeo and Juliet Prokofiev adapted for chamber ensemble. The representation will feature the author as narrator, and interpreters Gemma Romero (piano), Cristina Garcia (flute), Beatriz Alonso (fagot) Y Fran Cabanillas (saxo).

The commitment to young hopefuls

But one of the characteristics of the FS is its commitment to the promising young Spanish music scene, and the FS would not be such without its Youth Festival, that fulfills 21 years, a section through which will announce the winners talent 19 Santa Cecilia Piano Prize of Don Juan de Borbon Foundation and the winners of the competitions Intercentros Melómano, Pedro Bote Promises Young Award and Violoncello Jaime Dobato Benavente, concerts free access.

Twenty concerts, so that, for a festival aimed at all types of audience eager to enjoy good music, with prices ranging from gratuity (he 40% concerts are free access until full capacity), 3€ and 20 €.