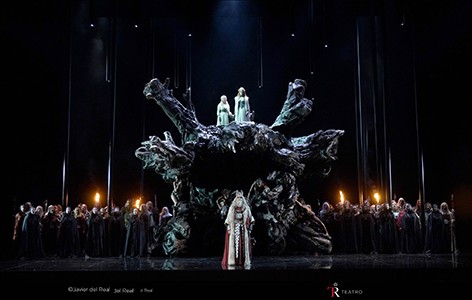 ABAO-OLBE (Bilbao Association of Friends of the Opera) Closing his 66th opera season Rule, ripeness of work of Bellini and emblematic title in the history of opera. The following days 19, 22, 25, 27 - Opera Berri - and 28 of May, sponsored by the BBVA Foundation, sponsor of ABAO-OLBE, up on stage this title, remarkable fusion of sublime melody, Vocal and dramatic power challenge.

this tragedy, compendium of ancestral rites, conflicts, allegiances and arcane customs, It tells the timeless story of a powerful woman who committed their ideals of love to finally be betrayed by her lover. To give life to the characters in this opera, ABAO-OLBE has assembled a cast led by the Neapolitan soprano Anna Pirozzi, who returns to Bilbao to debut the role of 'Norma', one of the most difficult characters to play in the bel canto repertoire that demands to dramatic voice combined with the agility and technique of coloratura singer. Beside the tenor Gregory customer like the Roman 'Pollione' and mezzosoprano Silvia Tro Santafe as 'Adalgisa' close on the trio. Joining them complete the lineup bass Roberto Tagliavini as 'Oroveso', mezzosoprano hope Mentxaka as 'Clotilde' and tenor Stephen Vincent as 'Flavio'. The musical part is by the young Italian master Pietro Rizzo, who returns to Bilbao for the front of the Bilbao Symphony Orchestra directing a score with huge emotional charge and melodic richness of one of the great legacies of bel canto. The choral part is once again task Bilbao Opera Choir, with Boris Dujin in front.

On stage a co-production with ABAO-OLBE Royal Theater and the Palau de Les Arts in Valencia conceived by Davide Livermore. The action takes place in a timeless universe, the central element of the set is conceived as a tree inspiration legends.

Bilbao's opera accessible to all - Bilboko guztion esku Nordic operates the "Yggdrasil", The Tree of Life. An epic aesthetics of druids and priestesses cinematographic rhythm moves around making the witness of the events that unfold in the plot. Just provided with scenic elements to accentuate the theatricality of the story, uses video projections to provide a deeper insight into the characters and their relationships. New Opera
Standard representation 27 of May, forms the twelfth edition of Opera Berri, ABAO-OLBE initiative developed to bring opera to new audiences with well-known titles and entries that are around 50% of their usual price. In this function return to Bilbao soprano Diana Axentii as 'Norma' and tenor Alejandro Roy as 'Pollione' and
debuta the mezzo Nazomi Kato como 'Adalgisa'. The rest of the poster (musical direction, orchestra, choir and stage direction) it keeps. Opera Berri function starts at 18:00 h.

In order to analyze, in advance the premiere, the most important aspects of this opera by Bellini, ABAO-OLBE has organized a conference, Free entrance until full capacity, For friday 18 May in the Auditorium of the Museum of Fine Arts (entrance door by Chillida) to 19.15 hours. This time will be Ruben Amon, one of the journalists more
media and recognized today, He is working in the newspaper El País and regularly participates in various radio and audiovisual media as Onda Cero, Antena3 and La Sexta. He has published several books on different subjects as an investigation into the secrets of the Prado (Today's topics 1997), the biography of Placido Domingo, A colossus on the world stage (Planet 2012) o The triumvirate: Careers, Domingo and Pavarotti, When the opera fills stadiums (Today's Posts 1996).

BBVA Foundation: a comprehensive program to bring the public the best music The BBVA Foundation, whose distinguishing feature is the impulse to scientific knowledge and cultural creation, Music articulates its program as a complete tour of the various ways in which society can benefit and enjoy this art, own space on the web www.contrapunto-fbbva.es . A) Yes, It promotes the creation of new work with composition commissions and enables preservation and dissemination through Opera sponsored by: Bilbao's opera accessible to all - Bilboko operates guztion esku recordings in collaboration with seals and interpreters frontline. Promotes live music through concert cycles, for free, put within reach of ensembles and soloists public reference in the contemporary repertoire. Organizes lectures and issues publications to better understand the work of certain authors or
immerse themselves in the study of certain compositional periods and implements research projects and highly innovative creation with Leonardo Grants in Music and Opera. Organizes specialized symposiums on management of orchestras, collaborates with musical ensembles and theaters across the country-from the Teatro Real and the Teatro de la Maestranza the Gran Teatro del Liceu, through the Bilbao Association of Friends of the Opera and the Symphony Orchestra of Madrid and recognizes excellence through Frontiers of Knowledge Award in Contemporary Music Composition Prize and the Spanish Association of Symphony Orchestras-BBVA Foundation.