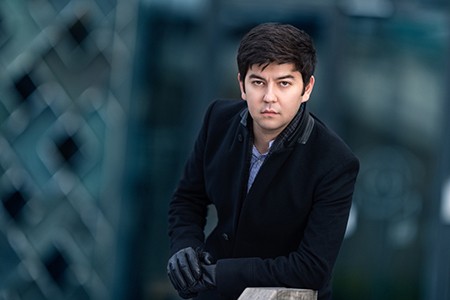 The next 13 November will Behzod Abduraimov who offered the penultimate recital of the 23rd edition of the Great Performers Series Scherzo replacing Murray Perahia. The pianist has been forced to cancel his performance on health grounds. Abduraimov is one of the most outstanding young artists on the international scene and concerts stand out for their great delicacy, musical depth and superb technical capacity. The program presented in this cycle organized by the Scherzo Foundation - to which he returns after debuting in Cycle Young Performers in 2015 – It includes works by Wagner, Liszt y Prokofiev.

Uzbek pianist has performed with some of the most important orchestras in the world such as Los Angeles Philharmonic, Boston Symphony, NHK Symphony and Leipzig Gewandhaus orchestras. Likewise, It has been put to directors such as Valery Gergiev, Vladimir Ashkenazy, Manfred Honeck, Vasily Petrenko, Gustavo Dudamel, James Gaffigan, Jakub Hrůša y Vladimir Jurowski.

Ha trabajado con el Festival de Lucerna, la Royal Concertgebouw Orchestra, Munich Philharmonic, Frankfurt Radio Symphony Orchestra, Philharmonia, Czech Philharmonic and the symphony orchestras of the BBC. En su agenda destacan sus conciertos con la Orquesta NDR de la Filarmónica del Elba for the premiere of his season in the Elbphilharmonie and the London Symphony Orchestra. In recital he is one of the artists in the Junge Wilde series of the Konzerthaus Dortmund and has presented at the Barbican in London and Amsterdam Concertgebouw. Abduraimov this season continues its collaboration with cellist Truls Mørk the after their successful performances during last Emporada. This time, They pass through the Wigmore Hall and Washington DC, among others. In May 2018 was a resident artist Zaubersee at the Lucerne Festival, que incluía un recital del Piano Concerto No. 2, Rachmaninov, and other chamber recitals. Además de actuar en el Festival de Lucerna lo hizo en el festival Kissinger Sommer.

In United States, Abduraimov will act with the symphonies of Pittsburgh and Seattle, It will be presented in concert with the Chicago Symphony Orchestra, 92nd Street Y, Maestro Foundation Vancouver Recital Series, among other. El pasado mes de julio regresó al Hollywood Bowl con una espectacular actuación de Rachmaninov y su Piano Concerto No. 2 bajo las órdenes de Gustavo Dudamel. Likewise, the young pianist made his debut with the Dallas Symphony Orchestra and returned to the Aspen Festival for a recital and concert. His upcoming engagements include performances with the symphony orchestras of San Francisco, Atlanta, Houston, Montreal y Minnesota; In addition to appearing at Carnegie Hall in recital and concert format.

Winner of several awards for his recordings, his recital debut CD won both the Choc Classica as the Diapason Découverte. Abduraimov published his first concert in 2014 para Decca Classics ofreciendo el Piano Concerto No.3, Prokofiev, and the Piano Concerto No.1, de Tchaikovsky, with the National Symphony Orchestra of the RAI and under the baton of Juraj Valcuha.

Born in Tashkent, Uzbekistan, in 1990, Abduraimov began playing the piano at age five as a student of Tamara Popovich at the Uspensky State Central Lyceum in Tashkent. Fue alumno de la Park University’s International Center for Music, where he studied with Stanislav Ioudenitch, and he is now a resident artist ICM.

The ticket price is set from the 25 euros. Young people under 26 years may attend concerts 10 euros going to the National Auditorium box office half an hour before the start of the concert. Throughout more than two decades of life of this cycle sponsored by El País and Cadena Ser, They have acted almost a hundred pianists in more than 200 concerts. These figures have become one of the best in their specialty cycles at European level.