Activities around 'Iphigenia in Thrace' 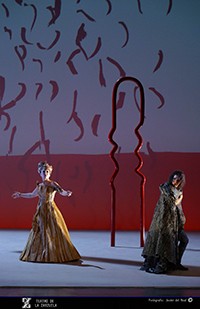 Seizing the premiere of the baroque zarzuela 'Iphigenia in Thrace', the Teatro de la Zarzuela has designed a real alternative programming around the work

Of the 27 October to 27 of November. The theater and the Thyssen-Bornemisza Museum jointly organized 'Frederic Amat, the painted scene ', a retrospective exhibition of the artist's play.

Thursday 10 of November. Frederic Amat give an open talk at the Thyssen-Bornemisza Museum.

Monday 14 of November. Frederic Amat will meet with students Escenografía, Fine Arts and other artistic and theatrical disciplines in a double session beginning in exhibition space, and will conclude at the Teatro de la Zarzuela with an explanation and technical scenery of pass 'Iphigenia in Thrace'.

Monday 14 of November. Musicologist Juan Jose Carreras will give a lecture about the work organized by the Friends of the Opera Theatre in Ambigú.

Monday 21 of November. Maria Bayo will meet with students of the School of Canto de Madrid in a session that also impart 'masterclasses'.

Friday 25 of November. The function of this day will be recorded by Classical Radio for your next issue.