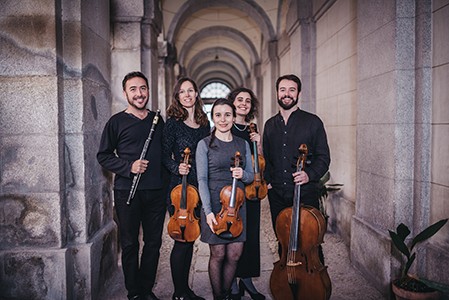 The formation of early music Spain, directed by Alejandro Marías, along with Rafael Ruibérriz de Torres, flauta travesera, and actor José Luis Gómez They have released a video on The Seven Words of Haydn-Barbieri. The training thus deepens its relationship with this very significant work of its repertoire, that La Spagna premiered in modern times in 2018 on the same stage where the original play was premiered, the Oratorio de la Santa Cueva, from Cádiz.

Being one of the key works for La Spagna in recent years, Alejandro Marías has wanted to go beyond his interpretation in concert with the edition of this audiovisual piece in which the actor José Luis Gómez gives the voice, and the photographer Jaime Massieu the images of the sacred pieces. At video Haydn - Barbieri's music performed by La Spagna is accompanied by images of the passion of Christ taken from the steps belonging to the Brotherhood of the Seven Words and the Brotherhood of the Sweet Name of Jesús Nazareno, of Lion. The stage is an industrial warehouse on whose walls the images of the steps are projected as a background to each of the seven words recited by Gómez.

When presenting the video, carried out for the AECID Window Program, Alejandro Marías explains the keys to his recording: “In a work like Las Siete Palabras it is necessary to refer to the scenes that the music describes, and for this the imagery of Holy Week is ideal; but we didn't want a baroque aesthetic, oblivious to both Haydn and Barbieri. That is why we speak with Jaime Massieu, with whom we have been working since 2014, and we decided to do something unprecedented. We travel to León, where we record seven steps of the brotherhoods of Las Siete Palabras and Dulce Nombre de Jesús Nazareno, to later project these images on the brick wall of an old industrial warehouse while we played a selection of each movement. In the end, for the earthquake, we asked him to come up with something crazy… He listened to us ".

Precisely the actor who lends his voice to the video, José Luis Gómez, will accompany La Spagna in its concert of the 20 March at the Joaquín Rodrigo de Las Rozas Auditorium. The previous day, he 19 of March, They will play at the Villamarta Theater in Jerez, with the poet José Mateos.

Spain, founded by Alejandro Marías in 2009, It is one of the early music groups that have most excelled in recent years. With very different provisions, from a small group of chamber to orchestral and operatic productions with guest conductors, the original instruments or copies set plays adapted to every age and style, as well as a historical interpretive criteria that approach to music as it was conceived by its authors. Spain, GEMA award for the best young group of ancient music, has published A Tribute to Telemann (Lukos Records ), A case of orchestral music that has received unanimous praise from international critics, as well as the work for viola da gamba Jacques Morel (Brilliant Classics).

Alejandro Marías (Madrid, 1984) He is a teacher of viola da gamba and baroque cello at the Superior Conservatory of Seville, artistic director of Spain, Goya Quartet cellist and regular contributor to groups like Zarabanda or Form Antiqva. He has given concerts in twenty countries and recorded for labels such as Brilliant, Warner o Winter&Winter, at the time it develops a work as a researcher, lecturer and essayist.

Sonata I (“Father, Let them, because they do not know, what do”) – Long

The earthquake - Quickly and with full force