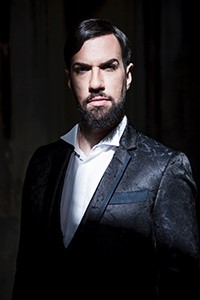 This is a crucial season in the already unstoppable career of the Italian singer Andrea Mastroni. Also trained as a clarinetist –and graduated in Philosophy and Aesthetics–, this deep-voiced performer, broad expressive power and solid vocal technique he has won several singing competitions before beginning his professional artistic career. After opening the day 23 this September the season of the Staaatsoper Hamburg (Hamburg, Germany) with a new production of Die Zauberflöte (The magic Flute) in his German debut of the character of Sarastro - a setting to which he will return from 10 October with his fearsome Sparafucile de Rigoletto (Verdi)–, the Milanese bass will travel to Venice in November to inaugurate the Gran Teatro La Fenice season with the world premiere of the composer's opera Aquagranda Philip Perocco (4 of November), counting on the stage direction of the regista Damiano Michieletto, with whom you collaborate regularly. In this new contemporary work, in which Mastroni will assume the title role, will be in theaters until 13 November and is announced as one of the great cultural events of the year in Italy.

Already entered 2017, Andrea Mastroni will debut in two of the most important theaters on the international circuit, starting with the Metropolitan Opera House in New York, where in January he will play Sparaficile by Rigoletto. In March he will sing for the first time the role of Fiesco by the Verdian Simon Boccanegra and he will do it at the Opéra de Monte-Carlo and later at the Théâtre du Chams Élysées in Paris. Another great international debut awaits you in May, when I sing for the first time at the Royal Opera House in London's Covent Garden: It will be in Don Carlo, under the direction of Bertrand de Billy and in a Nicholas Hytner production.