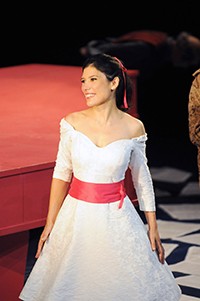 The last commitments of the Italian lyrical singer Annalisa Stroppa they have brought it with great success to the public of the Liceu Barcelona, last November, to play the role of Ascanio in the under-represented opera by Berlioz Benvenuto Cellini, under the stage direction of the Monty Python Terry Gilliam, and the Israeli Opera in Tel Aviv, between 12 March and 2 of April, debuting as the protagonist of Cinderella in the eponymous opera by Rossini.

In May the agenda of the young mezzo-soprano will mark her return to Spain to resume the role of the beautiful, flirtatious and determined Rosina, the female lead character in The Barber of Seville, also Rossini, with which he will debut in the season of the Bilbao Association of Friends of the Opera (ABAO-OLBE) the days 14, 17, 20 Y 23 of May.

«I am very excited about my debut before the Bilbao public», says the singer, «Mainly because I do it in a role that I love a lot and, even more, because it will be done in the captivating production of the bravisimo stage director Emilio Sagi, with whom I have already been fortunate to work on various occasions. In the musical direction will be the teacher José Miguel Pérez-Sierra, great Rossinian and with whom I will work for the first time ».

The friendly -and difficult- character is not new to Stroppa, which has been closely linked to his career. It debuted in Rome in 2012 directed by a whole authority in bel canto such as maestro Bruno Campanella; later it has retaken the role in various international theaters such as the German opera of Berlin, the Lausanne Opera (Switzerland), Gran Teatre del Liceu in Barcelona, the Tel-Aviv Opera or the Verona Philharmonic Theater, obtaining great applause and praise from both the public and critics, who has defined it as "Magnificent" (Opera News), «A Rosina from manual» (The reason), "The best of the cast" (The musical bee. with) and «Excellent: it is a pleasure for the eyes and ears » (Teatrionline.com).

Future commitments will take her back to Spain, when in June he sings in Menorca Fenena del Nabucco verdiano, and the Teatro Real in Madrid, in July, as Enrichetta of I Puritani. Later he will return to the Teatro alla Scala in Milan (Italy), then as Suzuki from Madama Butterfly.