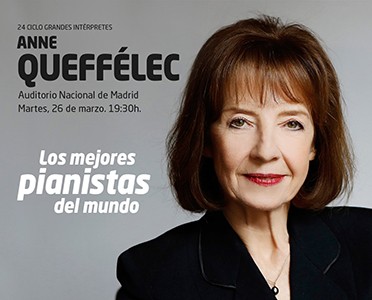 The next 26 March Parisian pianist Anne Queffélec It will be presented to the public of Great cycle Interpreters for the first time in his career. It will, Besides, ushering The best pianists in the world, Cycle initiative organized by the Scherzo Foundation that brings together four of the most outstanding performers of the current scene in a single payment. The best pianists in the world It includes Queffélec, Khatia the debutantes also Buniatiashvili (29 October) and Beatrice Rana (12 of November) and the legendary Martha Argerich with Kremerata Baltica (26 of November). This subscription offer, from the 92 euros, It is available only in the month of March in the Scherzo Foundation.

Likewise, he Cycle Great Performers of Scherzo He has prepared a special promotion for children 26 years, you can purchase two tickets 10 euros for Queffélec recitals and Javier Perianes.

For this occasion, French pianist has prepared an extensive program that includes works by Bach, one of his artists predilectos-, Scarlatti, Chopin, trade, Debussy y Mozart, among others. Likewise, The interpreter will offer a masterclass Monday 25 students of the Conservatory of Music in Madrid.

Anne Queffélec plays regularly at festivals in the UK, The Netherlands and Austria; as in festivals in France as Strasbourg, Montpellier, Besançon, La Grange de Meslay, La Folle Journée de Nantes. At the festival La Roque d'Anthéron, the pianist played a full cycle of Mozart sonatas in six concerts issued by France Musique. He also collaborated on the award-winning film Amadeus, de Milos Forman, under the direction of Sir Neville Marriner.

Both on stage and in recordings, Anne Queffélec cultivated an extensive repertoire, as demonstrated by their 40 recordings, ranging from Scarlatti to Dutilleux. Albums of this artist are published on Erato, Virgin Classics y Mirare. Among his most recent records include Satie & Team, who received the Diapason d'Or 2013; your CD Ravel, Debussy, Fauré de Erato (2014) and also Scarlatti Sonatas wonder (2015), both awarded a Diapason d'Or. June 2016 BBC Magazine He recommended several of his live recordings. In September 2016, French magazine Diapason selected its interpretation of Concerto in G Ravel as "indispensable". Anne Queffélec dedicate his next recording the piano sonatas of Mozart, which will in the Mirare seal along this 2019.

This concert will be the fourth season of the 24th Cycle Great Performers of Scherzo, He has prepared an issue with some of the best pianists in the international music scene: Arkadi Volodos, Maurizio Pollini, Javier Perianes, Josep Colom, Beatrice Rana y Khatia Buniatiashvili (the two debutants in the cycle with Queffélec) Martha Argerich and Kremerata Baltica with. The ticket price is set from the 20 euros, while under 26 years can buy tickets for six euros. In addition to the promotions thrown this March, the Scherzo Foundation has launched the initiative #EntrePianos a group of 15 young people who have never attended a concert can do it for free.

With nearly a quarter century of history, this cycle sponsored by THE COUNTRY, and the Inaem Cadena Ser It has been more than a hundred pianists who have participated in more than 200 concerts, thus becoming a European reference throughout its kind. Among some of his most acclaimed by critics and public appointments is the extraordinary concert by Gustavo Dudamel and the Mahler Chamber Orchestra in the last edition, considered by Cultural as one of the best 2018.