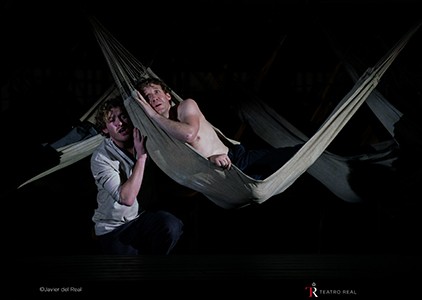 The Lawrence Olivier Awards, created and supervised by la Society of London Theatre, annually recognize the excellence of the performing arts in London, in a ceremony with great social impact that in recent years has taken place at the Royal Opera House (2012-2016) Y, since 2017, at the Royal Albert Hall.

Due to the confinement caused by the Covid, this year's awards ceremony, that would have taken place last April, was delayed until yesterday, 25 October, transformed into a TV program presented by Jason Manford and broadcast on ITV and Magic Radio.

In its different categories, recognizing the various fields of the performing arts, including the theater, Opera, musicals, dance, etc., Billy Budd has won the Olivier Award for best new operatic production for its presentation last year at the Royal Opera House, co-producer of the show together with the Teatro Real, that premiered it in 2017, and the Rome Opera, who presented it in 2018.

Billy Budd premiered in Madrid on 31 of January of 2017 with a new production by the Teatro Real with musical direction by Ivor Bolton, stage direction of Deborah Warner, scenery Michael Levine, figurines of Chloe Obolensky and lighting Jean Kalman.

The fantastic choral parts were performed by 60 male voices from Titular Choir of the Teatro Real and children of Little Singers of the Community of Madrid, who acted alongside the Head of the Royal Theatre Orchestra.