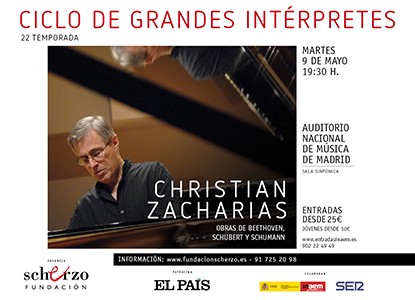 In more than a dozen times Christian Zacharias It has jumped on the stage National Auditorium of hand Fundación Scherzo. The conductor also arrives at this 22th edition of the Great Performers Series with a concert next Tuesday 9 of May, to 19:30 hours, at the National Auditorium of Music. The action program includes three of the Romantic composers favorite Zacharias: Beethoven, Schubert Y Schumann.

The qualities that have made this pianist one of the most famous current music scene also led him to his greatest recognition as a conductor, director of festivals, musical thinker, writer and broadcaster. Zacharias maintains an active career as a concert pianist, It works with leading directors and directs most renowned orchestras; many of his recordings have received international awards.

He was artistic and principal conductor of the Lausanne Chamber Orchestra. Among his recordings with this group highlights its complete cycle of Mozart piano concertos, which he won the Diapason d'Or, Shock the World y el ECHO Klassik.

Zacharias was “Artistic partner” the Chamber Orchestra of St. Paul since the season 2009/10. It also maintains close ties with the Gothenburg Symphony Orchestra, He is the Chief Guest for many years, and regularly works with orchestras such as the Los Angeles Philharmonic, the Hallé Orchestra of Manchester, La Residence Orchestra The Hague, the Orchester National de Lyon, la Bavarian Radio Symphony Orchestra (with whom he recently recorded Mozart), Bamberger Symphoniker or the Gurzenich Orchestra Cologne. In recent years he has turned his attention to opera, which he has led him to work in productions such as La Clemenza di Tito (Mozart), así como on ópera buffa Le nozze di Figaro and La Belle Hélène, from Offenbach. He has also worked on three films from 1990: Domenico Scarlatti In sevilla, Robert Schumann – the poet speaks (IN HER, Paris) y Between stage and greenroom (WDR-Art).

In 2015, Zacharias was part of the jury of the International Piano Competition Clara Haskil; a position he will occupy this year. During the season 2016/17, pianist act, among other concerts, with the Orchester de Paris as director, soloist and chamber musician. In several performances with the Orchester National de Lille will address his recital Schumann It is including four symphonies and his big solo concerts.

Zacharias debuted in Great Performers Year 1998 and he has performed on numerous occasions, including the opening concert of the 19th edition. This season organized by the Foundation Scherzo cycle, the number 22, It began with the recital offered by the pianist Daniil Trifonov. Between January and November 2017 They are scheduled ten concerts that will bring together musicians from Sokolov, Javier Perianes, Angela Hewitt O Ashkenazy.

PROGRAM TUESDAY 9 OF MAY