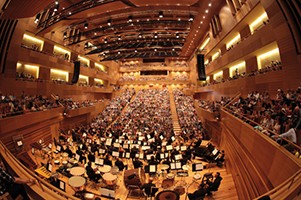 the CCMD Delibes + Antiguan cycle begins. It will be on Wednesday 2 and Thursday 3 from December, in the Chamber Hall of artistic space. The work of Pepper, composed 16 pieces, It is one of the most important compositions for violin Baroque, very revolutionary for its time, and it stands out for its uniqueness in structure and tuning, which it is a challenge for the violinist who performs as a soloist. Lina Tur Bonet, which has positioned itself among the elite of performers of his generation, It will be accompanied by Alchemy Music, one of the groups most prestigious international early music, founded and directed by herself. The cycle Delibes + Antigua It is conpleta concert Il Giardino Armonico and soprano Anna Prohaska, featuring works inspired by the figures of Dido and Cleopatra (12 from December); and the Ensemble Baroque OSCyL with Il Giardino Armonico members, which will include the repertoire some of the most outstanding baroque concerts (17 from December).

'Sonatas del Rosario', by Heinrich Ignaz Biber, will star startup cycle Delibes + Antigua, programmed into the Centro Cultural Miguel Delibes by the Ministry of Culture and Tourism. Violinist Lina Tur Ibizan origin Bonet and Musica Alchemica prestigious group will be responsible for interpreting the full in two concerts, which will take place on Wednesday and Thursday, days 2 Y 3 from December, to 20.00 hours, in the Chamber Hall of the CCMD. tickets, a 15 euros, They can be purchased at the box offices of CCMD, in time 18.00 a 21.00 hours, Monday to Friday; at the Center of Tourist Resources Acera de Recoletos, from 09.30 a 13.30 hours, from Monday to Saturday; and the web of artistic space, www.auditoriomigueldelibes.com. further, those under 30 years can benefit from the 'Last Minute Tickets' to 5 euros, available at the box office from CCMD 15 minutes before the start.

Sonatas stand out for their uniqueness in structure and also in regards to tuning, assuming a challenge for the soloist violinist. Total, son 16 pieces, very revolutionary for its time (They were composed around 1676). Religious theme, sonatas are currently the most recognized works of German composer Heinrich Ignaz Biber (1644-1704). But nevertheless, They were not discovered until 1889 and published in 1905. They are also known as "Mystery Sonatas' or 'Sonatas Bíblicas'. They are divided into three parts, each of which includes five sonatas: 'The Five Joyful Mysteries', addressing the annunciation and birth and childhood of Jesus; 'The five sorrowful mysteries', focusing on several episodes of the Passion; and 'The five glorious mysteries', They are dealing with the resurrection and ascension of Christ. These 15 parts adds more, one for violin representing the perfect finishing touch to a composition in which predominantly homophonic texture against polifónica. The concert Wednesday, CCMD audiences will enjoy the first part and the first three sonatas of the second section, while the remaining two and the last part will star concert Thursday.

Lina Tur Bonet has positioned itself among the elite musicians of his generation. Violinist versatile and highly demanded throughout Europe for top-level groupings, It includes an extensive repertoire rooted in the origins of the violin until our days, a repertoire that shines both as a soloist and with orchestras. It is an enthusiast of the work of Bach and recover the lesser known works of the most famous authors. This time, actuará junto a Music Alchemica, early music group she founded and directs today. He started this group with the aim of interpreting music of all time, but it was a project that transcended the field of music to address multidisciplinary artistic proposals, teaching and research. A) Yes, They have participated in numerous performances which have combined music, audiovisuals, dance, theater and other artistic disciplines. Together, violinist and music performed in Vienna Alchemica the integral of 'The Rosary Sonatas' in a single day.

The Delibes + Antigua, focused this season on a repertoire 100% baroque, will feature two concerts, which will also take place in December in the Chamber Hall of the CCMD, to 20.00 hours. First, Saturday 12, cargo run to Il Giardino Armonico, CCMD group residence, and soprano Anna Prohaska. Under the baton of Giovanni Antonini, They will perform several works inspired by the figures of Dido and Cleopatra. the proposal will close the Ensemble Baroque Castile and León Symphony Orchestra, OSCyL, junto a miembros de Il Giardino Armonico. It will be the day 17, Thursday, and the concert repertoire I make up some of the great concerts of the Baroque period. tickets, a 25 Y 15 euros, respectively, They can be purchased at the same outlets aforementioned. The 'Last Minute Tickets' will also be available for these two performances. further, the CCMD available to the public a credit for the full cycle 56 euros.