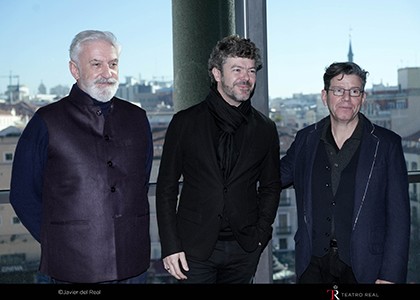 The production, released in 2000 at the Cologne Opera and replaced several times, moves to the real world and desolating Wagnerian visionary allegory, in which the moral degeneration leads to the devastation of the planet and the extinction of humanity.

Wagner worked 25 years to capture in his tetralogy the most comprehensive and complex expression of feelings, passion and instincts of the human being through a tangle allegorical inspired Nordic mythology, Germanic and medieval stories. To achieve this great company ─4 operas and almost 16 escénica─ hours of music wrote the libretto, He composed the score and did erect a theater in Bayreuth for his 'Gesamtkunstwerk' arrive in optimal conditions to the viewer.

He also left a huge amount of stage directions, pamphlets and letters that nourish since then thousands of studies, interpretations and exegesis of the tetralogy that keep alive his inexhaustible dialectical spring.

Structured like the ancient Greek tragedies and dramas ─tres sátira─, Rheingold It occupies a unique place as an explanatory prologue to the saga to be held in La Valquiria ─el origin of héroe─, Siegfried ─su glorificación─ y Götterdämmerung, His death and final cataclysm.

Although the libretto Rheingold He was born after the other three operas, his score was the first, Wagner and her masterfully presents the tens of leitmotiv (leitmotifs) which they will appear with all sorts of metamorphoses in subsequent days, growing in complexity and debugging. Throughout almost two hours, music flows seamlessly through a dense network of harmonic textures and themes intertwined in the orchestra, more than 110 musicians, has an active part in the conceptual and narrative of the epic.

Rheingold It also differs from the corpus of the other three operas for his dramatic apace, your mood, cynicism and its allegorical content than human. In it the idyllic relationship between man and nature breaks, when gold that lit up the waters of the Rhine becomes, under the cold gaze of reason, a valuable and coveted object, unleashing the power struggles that men turn away Love, nature and primal harmony.

Robert Carsen, in the Royal Theater he has directed Dialogues of the Carmelites (2006), Close Kabanová (2008), Salome (2010) e Iphigenia in Tauris (2011), places the viewer in a world contaminated, we are destroying among all, protected by a perverse power pyramid stratified, dominated by the overweening ambition of the strongest, rich and powerful.

Pablo Heras-Casado, first guest conductor of the Teatro Real, will direct its second title wagneriano, después del éxito de su lectura de The Flying Dutchman, directed by Alex Olle scene (La Fura dels Baus), in 2017. It will be his eighth opera in front of the Head of the Royal Theatre Orchestra.

Der Ring des Nibelungen It will be offered at the Royal Theater for the second time since its reopening in 1997. The four titles have arisen between 2001 Y 2004 in a co-production with Teatro Real Semperoper Dresden, with musical direction Peter Schneider and stage director Willy Decker. After the conceptual and symbolic reading of the German director, reach, 15 years later, direct and ruthless approach Robert Carsen Y Patrick Kinmonth, Today disturbing.