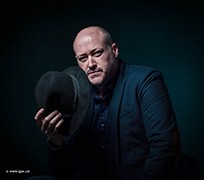 José Antonio López It is developing an important career at national and international level.
Their excellent vocal maturity, you are allowing access to more repertoires and new opera roles, strengthening its presence in the best theaters and auditoriums.

If at the end of 2013 Vienna and Munich heard their interpretations, begins the new year with a concert schedule that will take the first months, among other cities, Pamplona, Gijón, Barcelona, Bilbao, Palma de Mallorca and Valencia, with two major presences in Madrid:

National Auditorium – 31 January, 1 Y 2 February
Interpretando corifeo of Atlantis Fault
Under the baton of Josep Pons and the National Orchestra of Spain

Teatro de la Zarzuela – 15, 16, 17 Y 18 of April
New production tribute to Juan Hidalgo
The human and divine ...
Under the musical direction of Carlos Mena
and the artistic direction of Joan Antón Rechi

His repertoire encompasses various genres and historical periods and even the most avant-garde contemporary music. He has recorded for Deutsche Grammophon and Decca labels and DVD for Opus Arte.