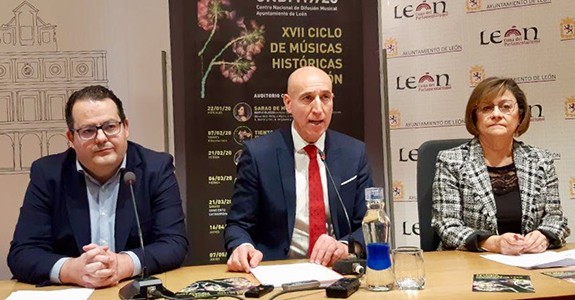 The director of the National Center for Broadcast Music (CNDM), Francisco Lorenzo, by José Antonio Diez, Mayor Councilor Leon and Cultural Action and Promotion, Evelia Fernández Pérez, They present the seventeenth edition of the Cycle de Leon Historical Music, coproduced program between the National Broadcasting Music Center (CNDM, unit of the National Institute of Performing Arts and Music of the Ministry of Culture and Sports) and the city of León. In addition to the nine concerts that make up this musical series, se celebrará la novena edición de un curso de extensión universitaria organizado conjuntamente con la Universidad de León (THE) and IX International Course of Baroque Vocal Performance, directed by Eduardo López Banzo. These activities continue the commitment of the CNDM to promote and recover the ancient musical heritage from Leon capital, through its programming 32 Spanish cities and 12 foreign, and support young singers Spaniards at the start of their careers.

Of the 22 January to 1 June 2020 you can enjoy, in the Auditorio Ciudad de León, nine proposed that show a wide musical range, an invitation to travel through contrasts creative. La cita inaugural llegará de la mano del conjunto Sarao Muses, that they invite the public to enter into a panorama of the Spanish music of the great centuries Johanna Rose (viol and direction) Y Marivi Blasco (soprano). The following quote, starring Ignacio Prego, one of the great values ​​of the harpsichord new interpretation in our country, together with the group he founded, Tiento New, will pose a musical journey "of the Habsburgs to the Bourbons" with works by A. Caldara, D. Scarlatti y C. Avison. A bachiana immersion is the chosen option Hippocampus Y Alberto Martínez Molina (and address key), a program compositions flute, in charge of the multifaceted Jorge Pardo. Entitled "From that vast sea. Music around the Iberian routes to circumnavigate the V centenary of the first return to the world of Magallanes and Elcano (1519-1522)”, veteran group La Folia, next to Pedro Bonet (recorders and direction) will offer the public a concert of the most striking in relation to places and avatars of the seaway.

In addition to the dedicated interpreters, leonine cycle, in an extraordinary concert, It will provide an opportunity to those who will soon take up the slack, the case arising from the settled Baroque Vocal Performance Course: Beatriz Arenas (soprano), Olmo Blanco (countertenor), Alberto Ballesta (tenor) and Daniel Muñoz (baritone), with self Eduardo López Banzo to the key and address. The concert will be a celebration of the European Day of Early Music (21 of March), with music by G. F. Haendel, A. Vivaldi, A. of Literes and J. S. Bach. The Haendel's Italian will be present at the concert Ensemble 1700 two interpreters famous, Dorothee Oberlinger (flute direction and) and the multi-talented Dmitry Sinkovsky (countertenor and violin), with a program that will also include music by A. Falconieri, T. Merula, G. P. Telemann, C. P. E. Bach y A. Vivaldi. Apotheosis, set resident of the season 19/20 CNDM, will present a monograph devoted to chamber music Haendel four trio sonatas for violin and two, one of them, version for flute. Dos conciertos del ciclo transversal #Spain Italy They will tread the boards Auditorium: the group The Tempest, with Silvia Márquez (and address key) Y Eugenia Boix (soprano), abordará un programa de compositores italianos en España que contará con cinco estrenos en tiempos modernos, the musical role of D. Scarlatti. They will complete the evening the works of G. Facco, D. Porretti and unknown murciano composer J. Oliver y Astorga. Ya en junio, the three great, Bach, Handel y Scarlatti, They will meet again in concert Baroque Orchestra of the University of Salamanca, with Pedro Gandía a violin and Alfredo Bernardini the baton and oboe.

With the idea to continue encouraging the public to get closer to historical music, este año los nueve recitales mantiene precios de ediciones anteriores: a credit of 64 € (eight concerts plus one gift and 20% off) for the entire cycle, which will be available from the 7 al 22 January in the usual shopping channels. The localities will be available from the 13 de enero en las taquillas del Auditorio Ciudad de León, www.aytoleon.es Y www.auditorioleon.es/you compradeentradas, at a price of 10 €, except for the extraordinary concert, whose price is 5 €. Those under 26 años y los alumnos de la Universidad de León disfrutarán de un descuento del 40% on the general ticket prices, with tickets 6 €.

Of the 21 February to 1 June 2020 the Multipurpose Hall of the Auditorio Ciudad de Leon will host the ninth university extension course promoted by the University of León and CNDM with the support of the City of Leon capital. The aim is to introduce students to the top, and other stakeholders, the value of Spanish heritage legacy, mainly musical, but also artistic, in their ongoing relationships and contacts. This initiative continues the collaboration created nine years ago between the three institutions involved. The course is divided into theoretical parts to the nine concerts cycle CNDM add as musical examples to treaty. Registration for this course and complete information will soon be available on the websites of the University of León and CNDM. On the other hand, Eduardo López Banzo will give the International Course IX of the Baroque Vocal Performance 22 al 26 March 2020, in the Auditorio Ciudad de León. The success of previous editions is reflected in the selection of 28 young singers (16 sopranos, 1 mezzo soprano, 4 baritones, 3 tenors and 4 countertenor) whose careers have been boosted, after passing through this specialized course, to join casts of international baroque productions.