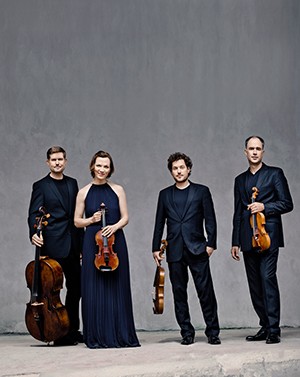 He Thursday 4 of April to 19.30 hours, National Dissemination Center Musical (CNDM) It presented in Chamber Hall of the Auditorio Nacional al Cuarteto Password with pianist Judith Jáuregui. The program chosen for the occasion joins Shostakovich and Weinberg, two friends who admired each other and suffered the consequences of political persecution. The case of the former is better known, but the second not so much: his family emigrated to Poland after the pogroms of 1903 Y 1905. In 1939 Weinberg sought refuge in the Soviet Union and lost her parents and her sister in a concentration camp.

The last tickets for this concert, with a general price 10 a 20 euros, They are on sale at the box office of the National Auditorium, INAEM theaters, www.entradasinaem.es Y 902 22 49 49.

Distinguished by critics as a light artist, elegant and personal, Judith Jáuregui It has become one of the most valued figures of the Spanish music scene. Born in San Sebastian 1985, He highlighted his talent soon led him to debut in concert with just 11 years. Habitual of the main Spanish stages, from the Auditorio Nacional in Madrid to Barcelona Auditorium, Auditorio de Zaragoza, Miguel Delibes of Valladolid, Festival of Granada, Peralada, Musika-Music Musical Fortnight of San Sebastian, Judith has given the jump in international festivals and famous places like Piano Festival La Roque d'Anthéron, La Folle Journée de Nantes, the Lille Piano Festival and the Festival of Montpellier in France, Murten Classics Festival in Switzerland that has been artist in residence, the National Center for the Performing Arts in Beijing or Tokyo Suntory Hall where successfully completed a recent tour of several cities in Japan with the National Orchestra of Spain.

He has also collaborated, among other, with the Symphony Orchestra of Castilla y León, Euskadi Symphony, Bilbao Symphony, Murcia Symphony, the Community of Madrid Orchestra, Oviedo Philharmonic and international formations among which include the Prague Philharmonia, Das Neue Orchester de Colonia, Aarhus Symphony, Slovak Sinfonietta Orchestra and the Simon Bolivar of Venezuela, having the opportunity to work with directors such as Andrey Boreyko, Marc Soustrot, Diego Matheuz, Jaime Martin, Victor Pablo Pérez, Christoph Spering o Kaspar Zehnder. Artist involved in chamber music, Jauregui currently has projects with different groups and musicians such as the German Signum Quartett or the Franco-Swiss cellist Nadège Rochat. On the other hand and from the conviction that music knows no stylistic boundaries, shares a project fusion and Latin jazz classic with Cuban pianist Pepe Rivero.

Fulfilling its most enterprising facet pianist created in 2013 his own record label, BerliMusic. In his latest release titled X, It delves into the ecstasy of Scriabin, inspired by Chopin and subsequent influence on Szymanowski. Her previous works include several authors and epochs, from Debussy, Liszt, Mompou Albéniz, Granados Schumann. His first record edited by Columna Música (Robert Schumann, the art of small) It was recognized as "Best Classical Album" in the 'Independent Music Awards'. He has also recorded for National Radio media as Spain, Spanish TV or Radio France Musique de Radio France.

Last season 2017-2018 They highlighted their debuts in London and Paris, at the Southbank Center and the Auditorium of the Louvre respectively, and his return to China, country that offered an extensive recital tour. He also starred with the Orchester de Córdoba, Symphony Orchestra of the Region of Murcia and the cycle Matinées of the Symphony Orchestra of Euskadi. Other appointments also led to the Opera House of Saint-Etienne and Toulon Festival in France, Schloss Elmau in Germany, as well as other Spanish venues such as the Teatro de la Maestranza in Seville, Baluarte Auditorium of Pamplona and Bilbao Palacio Euskalduna. Future commitments await you along the Hrladec Králové Philharmonic in the Czech Republic and in other venues such as the San Sebastian Musical Fortnight, Prince Felipe Auditorium in Oviedo or the Auditorio Nacional in Madrid.

He Cuarteto Password He has always left an indelible memory in all its actions in the most prestigious international stages, becoming one of the most interesting sets of time. Founded in 1994, The Quartet has been supported by Bayer Kultur as part of their cultural START program, and at the present time he is a member of BBC New Generation Series Ia 3 Artits. intensive studies with the Alban Berg Quartet, Artemis Quartet and the Melos Quartet, and Gyorgy Kurtag collaborations with, Walter Levin, Alfred Brendel, Leon Fleisher y Jorg Widmann, artfstico have characterized the development of the quartet has won numerous awards, including the prestigious 'Paolo Borciani', 'ICMC' Hamburg and the International Quartet Competition in London, where he also won the "Audience Award".

The quartet, whose mentors Jörg Widmann remain and Alfred Brendel, Igor Levit collaborates with, Leonard Elschenbroich, Adrian Brendel, Christian lhle Hadland, Eckart Runge (Artemis Quartet), Mark Simpson, Carolin Widmann y Dominique Horwitz. Among many other cities, their tours have ended in Paris, Vienna, Colonia, Basel, Oslo, Frankfurt o Santa Fe, and he has participated in festivals in Davos, Lofoten, West Cork, Schleswig-Holstein, Rheingau, Aldeburgh and Aix-enProvence. Tam have one actuado and Ia Berliner Philharmoniker, Tonhalle Dusseldorf with Leon Fleisher, Wigmore Hall in London with BBC Proms Ia, Laeiszhalle de Hamburgo, LiederhalleStuttgart, Concertgebouw of Amsterdam and the Harvard Music Association of Boston. At the invitation of the Goethe Institute, the group has toured Asia, Central America and Africa. In our country it has offered several concerts in Madrid and Barcelona, as well as Ia Philharmonic Society of Valencia, Salamanca City of Culture Foundation and the Canary Islands Music Festival. His last recording, in May 2013, Bartok quartets, Schnittke y Berg, He was awarded the 'International Music Award' to Ia "Best Chamber Music Recording". Signum Quartet concerts have been broadcast internationally by the radio stations of the ARD, Germany radio, DRS, ORF, BBC and Arts.