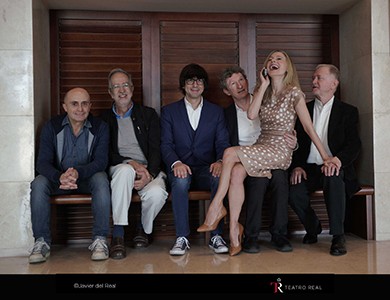 With the first autumn leaves, he Teatro Real It is about to raise the curtain of programming dedicated to children, youth and family of their season 2018-2019, Royal Junior, in order to zoom in and stimulate curiosity for art and culture to younger, both from a playful side, as training.

The high artistic value of child-youth programming, will feature this season with the presence of big names like showbiz Luis Piedrahita Y Pepe Viyuela, the scenic area as Tomás Muñoz or puppet company La Maquiné, the music scene with Sonia de Munck, Cristina Toledo y Laurel Dougall, or dance, with Fernando Lazaro, to name only a few of them.

As in previous years, Royal Junior will offer its programming on two stages: the Main Hall and the Sala Gayarre, and seven shows will be offered, five of which are new productions: The story of Babar, Sparkles and rhythms of a hurricane, Piano in darkness, The phone Y The Carnival of the Animals. the puppet show is presented in Real Story of a seed y se repone el espectáculo de danza Pulcinella, one of the most loved by the young audience in pasadaedición.

El ciclo de talleres familiares Everyone to the Gayarre! what, with monthly performs a musical introduction, lighthearted and entertaining, around the great titles of the main stage, will continue another year with management and presentation Fernando Palacios, Sunday nine meetings between the months of October to June.

Alongside the family functions, the Royal Theater continues its outreach program to schools; on the one hand, with the pedagogical functions, They are taking place in two stages, Y, for another, rebroadcasting shows Real Junior in schools throughout Spain, thanks to collaboration agreements with the autonomous communities (Andalusia, Aragon, Castilla la Mancha, Castilla y León, Madrid and Murcia), through stage Digital, platform online The Royal Theatre.

To enhance the experience, Real offers parents and teachers tutorial, accessible for free via the website of the Theater (www.teatro-real.es) in its new digital format, en la que se ofrece información detallada del espectáculo y, fundamentally, practical exercises for teachers and parents to help small to get a broader view of the world that will know.

After the great success last season, ‘Summer camps'They will be active during the month of July with activities around the opera, dance and costumes, where children can develop their creativity submerging in creating a show.

LÓVA (The opera, Learning a vehicle) the educational project carried out at the Royal Theater from 2009, aimed at primary schools where the tutor or tutor turns your classroom into an opera company, It is now essential part of the collaboration that makes the Madrid coliseum in this project. Thanks to him the class devotes an entire course to form a company in which pupils and students are organized by professional teams: dramaturgy, characterization, locker room, interpretation, public relations, production, lighting, regiduría, scenography, choreography and music. This activity learning materials that make up the school year is multiplied and promotes integration and inclusion.

The European Union has chosen Lova Spanish educational project as a reference to develop cultural awareness and expression (Cultural Awareness and Expression Handbook).

The training program of the Royal Theater, accomplished, will include a new series of introductory courses in opera, in addition to those already established in its program, as 'opera bare', the 'monographic courses' or 'college scene'. Through these courses, workshops and conferences is to provide a new space for cultural and professional development both opera lovers and those who approach it for the first time.

Under the name Fundamental concepts of opera, new courses, taught by Professor Gabriel Menendez, it is proposed to explain, through audiovisual examples, the fundamental concepts that allow us to penetrate the essence of the operas: the elements of the musical dramaturgy, the types of voices, vocal and instrumental forms, the interaction between solo, ensembles and choruses, the staging, etc. Intended for all audiences, each session strikes a key aspect of operatic composition and follows its evolution and development since the beginning of the opera until the late nineteenth century.

This season, Exposed opera delve into the technical and artistic details around three operas: the Rheingold, Falstaff e The tovatore, told in first person by its protagonists.

The monographic courses They inquire about various aspects of the musical world. Appointments of this edition will be, besides those mentioned Fundamental concepts of opera, Three Shakespearean musical (analyze the influence of William Shakespeare in today's theater world through The Boys From Syracuse, Kiss Me Kate Y West Side Story) Y Jerome Robbins and choreography in the Broadway musical (Facet focused as a choreographer Jerome Robbins in the Broadway musical, their influences and their impact). With them the Teatro Real wants to continue opening horizons to new training concepts.

University scene, pioneering project in Europe, registered in the European Higher Education Area, It allows college academic credit after participating in meetings and discussions with the artists and the subsequent development of an academic work on the productions of the Teatro Real, analyzed from the perspective of their respective specialties.

HISTORY OF A SEED

The show is a reflection on the abuses suffered by the environment at the hands of human beings, counted as a poetic fable, with a sensitivity and a sense of humor that makes this work is more effective than many environmental campaigns.

SPARKS AND RHYTHMS OF A HURRICANE

Leonard Bernstein tribute concert on the centenary of his birth.

Recommended for all audiences

A concert with some of the most sparkling and fun pieces musician of the twentieth century, whose side pedagogue brought us the secrets of music simply and clearly with informative concerts in the seventies

This amusing farce bring us some of the characters in the art commedy what, Using masks and colorful costumes, It represents certain archetypes that are nothing more than a grotesque reflection of human attitudes. Dance and gesture summed to tell this wonderful story that will captivate the little ones and will delight the greatest

Recommended for children from 12 years

The time and the perfect place to stop and listen to music silenced by the crackle of the fireplace: forgotten night, visionary pieces, variations for insomniacs, macabre waltzes, sentimental boleros, harmonies of the spheres, old tangos ... With works by Bach, Liszt, Grieg, Mussorgsky, Granados, Mompou, Failure, Consuelo Velázquez, Anibal Troilo…

Phone or LOVE TO THREE

Recommended for children from 10 years

The Telephone gold Love three, estrenada en Nueva York en 1947 tells, in key parody, the story of Lucy and Ben, a loving couple whose relationship is mediated by the addiction that Lucy has the phone.

THE CARNIVAL OF THE ANIMALS

Recommended for children from 8 years

Luis Piedrahita tells the adventures of a dwarf flea short leg you want to go skiing in Baqueira Beret. Music, humor and fleas. A work for all audiences in which large and small enjoy the grandeur of the music of Saint Saens and "pequeñosidad" of the Siphonaptera.

I_ STALKING THE DEVIL

Mephistopheles try to seduce, but it will difficult.

Tenor sleep will not let us to guess the three riddles.

The Alberico nibelungo manufactures a magical gold ring with nymphs.

Girl to bear, and dare to Dipper.

VII_ THE vivant who laughed WORLD

TODAY WE ARE VIII_ CAPRICHO

The countess has doubts: He does not know whether to stay with the poet or the musician.

IX_ WHO NIGHT ROUND?