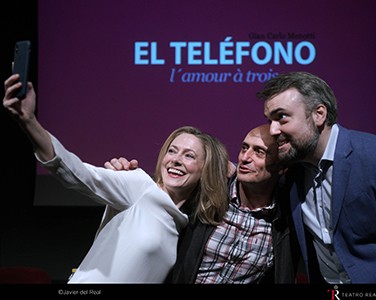 The younger look Teatro Real is now set in funny opera Gian Carlo Menotti: The phone, or love three, new production Royal Junior, conceived by the stage manager Tomás Muñoz, also responsible for set design and lighting, which can be enjoyed in the Main Hall of the Madrid coliseum day 23 Y 24 of March, double session at 11.00 and to the 13.00 hours.

Muñoz has had the voices and the sympathy of the soprano Sonia de Munck and baritone Gerardo Bullón to give life to the main characters, whose love story need the complicity of an exceptional master of ceremonies, played by multi-talented artist Pepe Viyuela -recién galardonado con el Premio de la Unión de Actores al Mejor Actor Secundario- who will guide lovers, through absurd situations, until a happy ending.

Premiered in New York in 1947, The phone, or love three, It tells the story of Lucy and Ben, two lovers whose relationship is complicated, each minute, by addiction she has the phone. This original comic opera, whose subject is more topical than ever in our lives and, especially, en las de los jóvenes, Get started more than a smile (unapologetic and laugh) also making us reflect on the possession and mastery of new technologies (the phone, in this case) They have on us.

Menotti's music, eclectic and free, so cheerful and lighthearted as the argument approach to work, we moved to Broadway musicals and shows of American television forties and fixed in the mind of the beholder beautiful melodies. The version that will be offered at the Royal Theater, in Castilian and English, It will be interpreted by the Soloists of the Titular Orchestra of the Teatro Real and directed by the teacher Jordi Navarro.

Seeking the complicity of everyone in the room, Tomás Muñoz invites off mobile phones during the performance. Before starting, the phones are turned off and only turn on again after the epilogue, where we attended the wedding of the protagonists and the public can photograph the scene, do 'selfies' and send tweets of congratulations to newlyweds, with commentary on the opera.

As in every show programming Real Junior, the Royal Theater offers schools and spectators who attend family functions, a Teaching guide with interesting content about opera. A playful, Youngsters can expand their knowledge before attending the performance or have fun exploring the world Menotti.

THE PHONE, or love three

comic opera in one act