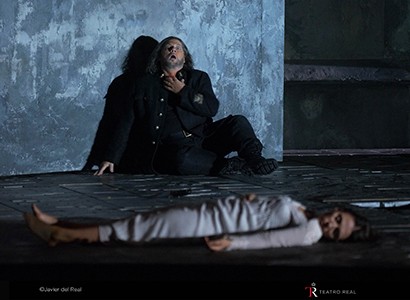 The next 23 April commemorates the International Book Day, around this celebration MyOperaPlayer has selected opera titles inspired by great literary works whose performances have taken place in the Teatro Real

The Golden Age inaugurates this cultural proposal with Fuenteovejuna, version of the homonymous play by Lope de Vega (1562-1635) created by Antonio Gades and performed by his company, with a masterful show of narration and expressiveness through Spanish dance

We dedicated the weekend to an opera whose premiere took place at the Teatro Real precisely a 23 of April, in 2019, Falstaff, de Giuseppe Verdi, whose visualization will be available only these two days. The poet Arrigo Boito seeks inspiration for the libretto in various works by William Shakespeare (1564-1516)

Year 2015 world premiere of opera takes place The public, commission from the Teatro Real to the composer Mauricio Sotelo, with libretto by the writer and musician Andrés Ibáñez. The opera rescues the essence of the work of the same title by Federico García Lorca (1898-1936)

W's sweeping dramatic force. Shakespeare, who portrays like nobody the essences of the human being, is at the genesis of some of G's great titles. Verdi as is the case of Otello. A. Boito was responsible for converting the work of the English immortal into a script, The Moor of Venice

On the fruitful collaboration between the composer Richard Strauss and the poet and playwright Hugo von Hofmannsthal is born an indispensable work in the history of the opera, Elektra, based on the homonymous narration of Sophocles (496 a.c.- 406 a.c.)

We remind you that, To access all the contents of MyOperaPlayer for free, all you have to do is register the link www.myoperaplayer.com and enter the code OperaEnCasa.

Many are the opera composers who have drank from literary sources for the elaboration of their librettos, combining two arts that on numerous occasions have contributed to mutual aggrandizement and others have suffered unequal luck. In the same way, the world of dance, with its double musical and choreographic language, has narrated stories and beautiful tales from the pen of great authors.

Stimulated by this eternal relationship, and with the close celebration of International Book Day, the next 23 of April, he Teatro Real has selected a series of operas for its video platform MyOperaPlayer, whose argument is born from titles of universal literature through the rewriting of authors no less celebrated as Arrigo Boito, in the case of Giuseppe Verdi; Hugo von Hofmannsthal, in the of Richard Strauss, O Andrés Ibáñez, in the of Mauricio Sotelo.

The former artistic director of the Teatro Real, Gerard Mortier, commissioned in 2010 to the Spanish composer Mauricio Sotelo a new opera. Five years later the Madrid stage would host the world premiere of The public, with libretto by the writer and musician Andrés Ibáñez on the homonymous work of Federico Garcia Lorca. Complex, symbolic and transcendental, opera relies on resources as distant as electronic music or flamenco, sung and danced, recreating a murky universe and, sometimes heartbreaking, loaded with images of intense beauty.

In autumn 1998 the Teatro Real faced the second season since its reopening. In your programming, the then artistic and musical director of the institution, Luis Antonio García Navarro, he put himself in front of Elektra, Richard Strauss, starring one of the leading interpreters of this role, Eva Marton. Spanish Television now rescues this production from its historical archive to offer it on MyOperaPlayer.

However, the dance will be in charge of opening this special week at the hands of Antonio Gades and his company with one of the jewels of his repertoire, Fuenteovejuna. In this choreography, the talent of the great Gades joins that of Lope de Vega, in collaboration with José Manuel Caballero Bonald, to tell us about the solidarity struggle of a people against tyranny through the expression of the best Spanish dance and the most genuine folklore that result in a mythical show that has been exhibited around the world.

Like at the best book fair, it seems that this week the rain will accompany us. One more reason to delve into this new musical proposal.

Fuenteovejuna, culminating work of Antonio Gades, it is above all a most beautiful work, the last fruit of a great artistic and personal maturity. The subtle and moving quality of its material resides neither in its aesthetic values ​​nor in its spectacular nature., but in the overwhelming simplicity with which it shows the essence of the things it wants to tell.

Released at the Carlo Fenice Opera in Genoa, he 20 December 1994, is based on the eponymous dramatic creation by Lope de Vega, from a historical event in which an entire town in upper Andalusia, Ovejuna Fountain, rebels against abuse by a noble, the Commander of the Order of Calatrava Fernán Gómez de Guzmán, and ends up executing it. When the Catholic Monarchs, Isabel and Fernando, they send a judge to clarify the case, not even by subjecting the villagers to the worst torture can they make them denounce the culprit, well all, with one voice, assume the death of the "ignoble" noble and the responsibility for his destiny.

Dedicated to the memory of Celia Sánchez Manduley, the adaptation of the work is the responsibility of Gades himself with the collaboration of José Manuel Caballero Bonald. The show has a luxurious artistic team in which they participate in the setting and costumes Pedro Moreno; in lighting, Dominique You y en los arreglos y selección musical Faustino Núñez.

The premiere of this production took place, precisely, he 23 April 2019, International Book Day, at the Theatre Royal. Is about Falstaff, whose script, from Arrigo Boito, is inspired by passages from The Merry Wives of Windsor, Enrique IV Y Enrique V from William Shakespeare, at the service of the genius of Giuseppe Verdi who, octogenarian, write a great score, dismissing his operatic career with a song full humanity mood, wisdom, vitality, profundity and rejoicing.

Laurent Pelly, responsible for the stage direction and the figures of the opera - very dear to the Royal for his accurate versions of The Daughter of the Regiment (2014), Hansel and Gretel (2015) Y The Golden Cockerel (2017)- traslada la acción de la obra a nuestro tiempo con una escenografía esquemática, ‘Organic’ and mutant, designed by Barbara de Limburg, in which he delves deeper into the characters through a narration in which the limits of farce and comedy vanish, to enter the magical realm of enchantment and fable.

The fat bluster amuses us with our sorrows, nos redime de nuestras miserias y nos lleva a un mundo mejor, more tolerant and smiling, from which "everything is a joke".

The public, commission from the Teatro Real to the composer Mauricio Sotelo, with libretto by the writer and musician Andrés Ibáñez (1961), rescues the essence of the novel by Federico Garcia Lorca (1898-1936) written in 1930 in Cuba, after the transcendent trip that the Granada poet made to New York, in a period of deep emotional crisis and creative effervescence.

When writing the script of The public, Andrés Ibáñez has tried to preserve all the dimensions of the work, maintaining its two fundamental themes: “homosexuality and contemporary theater. Both are united in a central theme that has to do with the appearance or the mask. Mask 'love that can not speak its name' and, Finally, mask is revealed as the essence of the human being. (…) Obscenity, cruelty and irreverence are fundamental elements of Lorca's poetic language. Not emphasized or avoided. The text explores sexual desire with frankness and complexity that defies well-intentioned or more or less moralizing simplifications.”

Also for Mauricio Sotelo, “the intelligibility of the sung text was the beacon that always guided the composition process. If the text is clearly understood, then it will be possible for it to project all its light onto the viewer.”

The composer is inspired by the symbolic world of the poet. Starting from the letters of the name L-O-R-C-A, Sotelo weaves a fluid but complex score, in which he uses from the harmonic textures of microtonalism to sophisticated electronic techniques, y en la que esconde relaciones numéricas, esoteric and iconic, without disregarding the structure of a traditional opera, with a prologue and five pictures, arias, duos, interludes, etc ... To explore the ancient and telluric world that underlies Lorca's text, animal and sexual forces, has resorted to flamenco, incorporating in the score its language and its duende.

A diverse and multicultural group of interpreters will bring to life the symbolic world of The public: eight singers led by baritones José Antonio Lopez Y Thomas Tatzl, will incarnate, each, to various characters; two cantaores, Archangel Y Jesus Mendez, junto con el bailaor Ruben Olmo, interpret the three white horses symbolizing the uncontrollable forces of nature; three dancers representing the harlequin costumes, dancer and pajamas and, Finally, two children dancers and actors. Next to them will be the Titular Choir of the Teatro Real, the prestigious orchestra contemporary music Klangforum de Viena, guitarist Cañizares and percussionist Augustine Diassera, all under the direction of Pablo Heras-Casado, Principal Guest Musical Director of the Teatro Real.

The scenery is designed by the painter and sculptor Alexander Polzin and the stage direction is in charge of Robert Castro.

The sweeping dramatic force of William Shakespeare becomes again a source of inspiration for Giuseppe Verdi and the poet Arrigo Boito giving as fruit Otello. Boito builds a libretto for this opera in which he simplifies the plot, delving into the complexity of the characters and their relationships, while Verdi uses all his creative resources at the service of dramaturgy, creating a seamless score, with a great orchestration in which the song flows like a declamation, Interlocking subtle melodies, epigramáticas cases, huge dramatic force, with other long expressive breath.

This production has a trio starring in authentic luxury led by the tenor Gregory customer, one of the most celebrated interpreters of the demanding role of Otello today; the Albanian soprano Jaho Ermonela, moving in her portrayal of Desdemona, and baritone George Petean, incarnating the sibilant sadist and Iago. The chorus Little Singers of the Community of Madrid, directed by Ana González, and the Titular Choir of the Teatro Real, prepared, as usual, by its chief conductor, Andrés Máspero, will act again by the Head of the Royal Theatre Orchestra, under the baton of Renato Palumbo

American stage director David Alden chooses to emphasize the internal conflict of Otello, whose warlike character masks the enormous insecurity that makes the wicked machinations of Iago vulnerable. A ruined city and gloomy Mediterranean conceived by scenographer Jon Morrell accentuates the terrifying atmosphere of the drama.

From the historical archive of RTVE we rescued, this time, Elektra, from Richard Strauss, whose representation took place in November 1998, when the second season of the Teatro Real began to shoot, whose reopening had taken place a year earlier. This story of hate and revenge, with libretto by the poet Hugo von Hofmannsthal, inspired by the work of Sophocles, of complex orchestration and extreme interpretative difficulty, he had at the forefront of the project García Navarro, artistic and musical director of the Madrid coliseum at that time.

He 29 of January of 1996 the theater of La Fenice in Venice burned for the second time in its history. The ruins of that emblematic opera house served as inspiration for Ezio Toffolutti to create the scenography of this production in which he tried to renew and update the classic myth that Strauss Y Hofmannsthal they had located in the inner courtyard of the palace of Agamemnon.

In this devastated space, under the direction of Henning Brockhaus, The heartbreaking story of Electra embodied in the voice of what has been considered one of the best interpreters of this role took shape., Eva Marton. Leading the cast was this dramatic soprano in which she was accompanied by the Norwegian mezzo-soprano Anne Gjevang, as Clitemnestra, and the Spanish soprano Ana María Sánchez, in the role of Crisotemis, completing the protagonist trio. With them, the North American tenor Kenneth Riegel, Aegisthus, low german Hans Tschammer, Orestes, and the Madrid Symphony Orchestra.