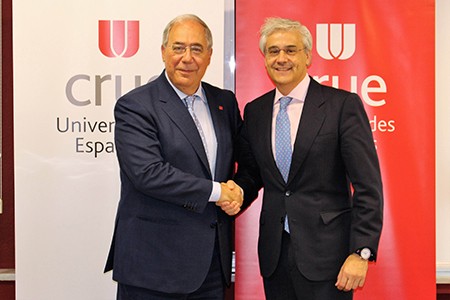 The general director of the Royal Theater, Ignacio García-Belenguer, Crue and President of Spanish Universities, Roberto Fernández, They have signed a collaboration agreement whereby both institutions agree to undertake joint projects in the fields of university extension, investigation, teaching, training and promotion of the arts. The collaboration between the two entities can admire, among others, organizing cultural activities (seminars, conferences or courses) and training activities giving rise to the recognition of college credits.

The president of Crue Spanish Universities has stressed that universities have "a mission of enormous cultural activity" and that, for this reason, "It is very symbolic that the Teatro Real is interested in collaborating with them". Roberto Fernández recalled that the Spanish university has 1.200.000 students and 200.000 teachers, "A cultured fringe that, Besides, constantly regenerates ", stressed the president of Crue Spanish Universities. Meanwhile, the general director of the Royal Theater, Ignacio García-Belenguer, has remarked that "a large part of the public of the future of the institution is in the universities and university students". "Having this group is a key element for our evolution, because nine out of ten attendees at the Teatro Real have a university education ", Garcia-Belenguer noted.

Through this agreement, Crue Spanish Universities is committed to promote and disseminate activities performed by the Teatro Real between 76 associated universities and will encourage participation in the program "The University on Stage". The initiative, launched in the year 2010, has allowed more than 14.000 students of 20 universities and schools of artistic education have discovered the Royal Theater inside through technical visits, meetings and debates with artists and professionals, as well as attendance at rehearsals. "Having the support of universities and rectors is a great support for dissemination and speaker of the activity of the Royal Theater to reach university students throughout Spain, and involve everyone in this experience ", García-Belenguer concluded.