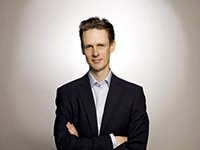 He CNDM He has prepared a recital at the Chamber Hall of the National Auditorium of Madrid Ian Bostridge, Fretwork Y Elizabeth Kenny. With them they quote one of the great interpreters of song art of our time and a great specialist in early music group. The dialogue this time is between Dowland and Britten, with mandatory stop at some of the best known Lachrymae the first, these enigmatic and poetic works among which also inspired the second. songs, pavanas and perky Dowland on one side and the same for the other, the Britten. The meeting between the two composers is here, we would say Fretwork final and Bostridge and dramatize it before our eyes. The problem of a program like the present is that perhaps, as it happened to the protagonist of Death in Venice or Italian Stendhal, we should warn about the effects of such beauty board.

Ian Bostridge working on his post-doctorate in history at Corpus Christie College, Oxford before pursue music professionally. Since then he has sung at the Salzburg Festival, Edinburgh, Munich, Vienna, Aldenburgh and distintas Schubertiadas. In 1999 he released a song cycle of Hans Werner Henze dedicated to him. In 2003/2004 was artist in residence at the Vienna Konzerthaus and the Schubertiade Schwarzenberg. In 2004/2005 He shared a "carte blanche" with Thomas Quasthoff at the Amsterdam Concertgebouw, in 2005/2006 conducted a series own "Perspectives" at Carnegie Hall, at 2008 at the Barbican in London, in 2010.11 with the Luxembourg Philharmonic and 2011.12 at the Wigmore Hall.
It debuted at the opera 1994 as Lysander in A Midsummer Night's Dream Britten with Opera Australia at the Edinburgh Festival. In 1996 She debuted at the National Opera as Tamino Inglés returning later to sing Semele. In 1997 He sang Quint in Deborah Warner's production of a twist of Britten for the Royal Opera House.
15 January at 19:30 in the Chamber Hall of the Auditorio Nacional de Madrid.