Spain beats to the rhythm of the Teatro Real opera 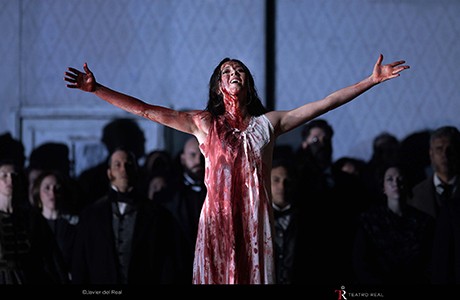 In this edition we have increased outdoor screens, installed in about 30 very different spaces, from parks and gardens to bullrings.

In the Plaza de Oriente, in front of the facade of the Royal Theater, They will be installed 3 screens and placed 2400 chairs.

As in previous editions, Lucia of Lammermoor It will be broadcast free of charge to everyone in Facebook Live, stage Digital Y Opera Vision. the YouTuber Jaime Altozano He discussed the broadcast in real time on Twitter with the hashtag #LocuraConLucia.

Saturday 7 of July, between the 10.00 and the 14.30 hours, the public can access the most emblematic Teatro Real during his traditional Open Day.

On Saturday morning, starting at 11.30 hours, will take place in the Plaza de Oriente one flashmob of dance inspired by Swan Lake, in collaboration with the British Council and the London Royal Ballet.

All who wish to participate in the choreography can practice with the tutorial Dance in the City or come to the Plaza de Oriente on Saturday and freely follow the dancers.

Likewise, until next Friday at 18.30 hours continue, in the Sala Gayarre Teatro Real, projections of operas and ballets with free admission until full capacity.

He 8 of July, Sunday, to 11.30 hours, the great feast of the opera will close with a free screening, in the main hall of the Teatro Real, of production Madama Butterfly from the New National Theater in Tokyo, Reaffirming the commitment of the Royal Theater by the union of cultures, after recent agreements with Japan, China and the Arab Emirates United.

Throughout the Opera Week Are developing contests Y raffles to promote citizen participation through the web and social networks Theater Royal.

Opera Week, Framed in the celebration of Bicentenary of the Royal Theatre, It is sponsored by Telefónica, Endesa, Mutua Madrileña, Redexis Gas and collaboration of RTVE and Hispasat.

The opera Lucia of Lammermoor It is sponsored by Telefónica.

While the activities are carried out Opera Week Y Lucia of Lammermoor triumphs every night at the Royal Theater, towns and cities 42 Spanish provinces They are preparing for retransmission of the opera, he next Saturday, 7 of July, to 21.30 hours, which may be followed in Facebook Live through the url www.locuraconlucia.com. the YouTuber Jaime Altozano It will discuss the real-time broadcasting Twitter the hashtag #LocuraConLucia and They raffled tickets among users tell their experience during the broadcast.

In this fourth edition of the Opera Week they have increased retransmissions outdoor, with about 30 screens installed in such diverse areas as polideportiva track of Alcampell, in Huesca (700 people) one to Bullring Villanueva de Córdoba, capable 2500 people; he Park Almadabillas in Almería (400 people) or Jardines Can Found Garriguella, in Gerona (100 people).

Important areas such as main squares of Segovia and Valladolid, the Zaragoza Plaza San Bruno, the Church Square in Alicante, he Paseo del Espolón in Logroño, or the Paseo de la Concha in Murcia, They join small courtyards of cultural centers and town halls, or squares of towns as Parcent (Alicante), Huetor Vega (Granada), O Grove (Pontevedra), Usagre (Badajós), Gilena (Sevilla), Villatobas (Toledo) O Las Pedrosa (Zaragoza). Some cities, as Orihuela, They have two relay points outdoors, such as Plaza Ramón Sijé, in the historical district, and the Esplanade Orihuela, on the coast.

In addition to the outdoor screens, again they have joined the relay, auditoriums, theaters, cinemas and cultural centers, with varied seating capacity. such small towns like the good (Segovia), O Gotarredura (Ávila), with less than 150 registered inhabitants, will provide Lucia of Lammermoor along with museums like the Prado, he Thyssen, he National archaeological, he Guggenheim Bilbao or Center Niemeyer Aviles.

But the week of opera will offer the next Saturday other attractive proposals that will begin at 10.30 hours, with a new Open Day and continue, to 11.30 hours, with the flashmob Dance in the City, organized in collaboration with the British Council and the London Royal Ballet ─ which will offer 6 functions Swan Lake at the Royal Theater between days 18 Y 22 of July.

The program also reflects the collaborative ties with institutions of the Royal Theater and cultural events through an active policy of national and international agreements, such as those recently signed with China, the Arab Emirates States and Japan, the latter under the 150 anniversary of the signing of the Treaty of Friendship, Commerce and Navigation between Spain and Japan.

Within the scope of these agreements will be offered at the Theater Royal projections three productions from Japan: ballets The Nutcracker Y Swan Lake in the Sala Gayarre, Y on Sunday at 11.30 hours, shutting down the Opera Week, Madama Butterfly, Giacomo Puccini in Living room, free admission (agreement with the New National Theater in Tokyo).

Lucia is a young orphan, unbalanced and dreamy, in love with Edgardo, enemy of the family, He hated by his brother, that encourages marry a noble wealthy to save ruin. For that, with the complicity of the chaplain and the black arts of his guardian, Lucia led to believe that her lover has betrayed. Pushed to sign the marriage certificate, young, broken by grief and madness Dam, murders her husband in the wedding night, Alienated in a sort of angelic dream that culminates in his death and the subsequent suicide of her beloved.

With this gruesome story and craft and characteristic fruitfulness of Gaetano Donizetti wrote opera ─ which in just over a mes─, the score flows, overwhelming, alternating fast-paced drama with long suspensions of theatrical action, in which the characters express their feelings with great expressive breath and a full vocal writing of artifices, often for the benefit of the psychological characterization of the characters. A) Yes, the extreme difficulty of the coloratura and high registers and demonized the role of Lucia give your character an unreal and dreamlike aura, immortalized singers Maria Callas, Leyla Gencer, Joan Sutherland O Edita Gruberova.

To give consistency to this dramatic plot hyperbolic, stage director David Alden Opera stands in a decaying Victorian sanatorium designed by scenographer Charles Edward, which it was inspired by the former residence of the British physician John Langdon Down, discoverer of Down syndrome. In a sinister and claustrophobic atmosphere both brothers maintain an unhealthy relationship, in which everything seems to happen in a spectral environment, reminiscent of the fantastic literature Allan Poe.

Spain will sigh with all the misery of Lucia of Lammermoor, get carried away by their chimeras and enjoy a night of the best belcanto, sharing their experiences with the hashtag #LocuraConLucia.