Tribute to Montserrat Caballe at the Royal Theatre 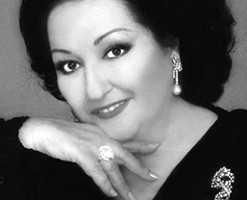 The next 9 from December, Tuesday, to 20 hours, will take place in the Teatro Real A tribute concert to Montserrat Caballé, in which recognized related sopranos, somehow, with singer famous Barcelona, They will perform pieces that remember his triumphs in Madrid or evoke its incomparable interpretations of romantic bel canto repertoire, Verdi, Strauss or Wagner.

In the second part of the concert fragments of some memorable performances by Montserrat Caballe at the Royal Theatre will be shown as a concert hall, with composers like Vivaldi, Granados or Bellini. In this last stage of the Real, Caballé has offered a concert 2 July 1998 and it has starred in two features of the opera Cleopatre, from Jules Massenet, in concert, in December 2004.

The amazing career of Montserrat Caballe is one of the brightest in the history of the universal lyrical interpretation. The singular beauty of her voice, large extension, the rich color palette of timbre, his prodigious technique, the expressiveness of its refined singing line, the incredible dramatic plasticity of their vocal performances, Allied to his desire to explore unknown or forgotten works, They have placed his name in the exclusive gallery of the greatest singers of the second half of the twentieth century.

After its first steps, in the years 50, at Teatre Fortuny Reus, his performances in the company of Municipal Theater Basel between 1956 Y 1960, and the contract with the Bremen Opera from that year, the dazzling Montserrat Caballé international career took off in New York, when in 1965 replaced Marilyn Horne in the title role of Lucrezia Borgia, Donizetti, at Carnegie Hall. After the first aria the audience gave her a standing ovation twenty minutes at the end of the function began his meteoric career by leading opera houses of Europe and America: La Scala in Milan, Metropolitan New York, Staatsoper de Viena, Royal Opera House de Londres, Paris Opera, Liceu Barcelona, Teatro de la Zarzuela in Madrid, Moscow Bolshoi, Teatro Colon in Buenos Aires, San Francisco operas, Hamburg and Munich, etc., and Salzburg festivals, Aix en Provence, Orange, Glyndebourne, Pesaro and Verona.

Montserrat Caballé's repertoire is immense. With about 90 different operatic roles, It is unrivaled in its tessitura, in the world of opera. His record is equally wordy catalog, more than 80 Titles, half of which are complete operas.

Before its international hatching, Caballé played different roles in the theaters of Basel and Bremen, from the heroines of Verdi and Puccini to Arabella and Salome, Richard Strauss , with Arabella, She debuted at the Liceu in Barcelona, in 1962. Over the years his career was forming around a small list of composers whose repertoire deepened and refined to achieve their indelible performances of Gioachino Rossini, Luigi Cherubini, Vicenzo Bellini, Gaetano Donizetti, Giuseppe Verdi, Giacomo Puccini, Blom or Jules Massenet.

He debuted in Madrid in 1967 with La Traviata and Manon, the latter sharing the stage with Alfredo Kraus. later would come, at the Teatro de la Zarzuela, interpretations of many of his greatest roles: Elisabetta (de Robert Devereux), Cio-Cio-San, Rule, Adriana Lecouvreur, Maria Stuarda, Leonora, Semiramide, Ermione, Maddalena (Andrea Chénier), Silvana (La Flame, de Ottorino Respighi), Elisabetta (Don Carlo) or the queen star of Sancia, Donizetti, one of the composers who dedicated a devout attention as an interpreter, research and publishing. The public of Madrid has also witnessed his rare and exciting forays into the Germanic repertoire, giving life to Salome, Richard Strauss, or Isolde and Sieglinde, Richard Wagner.

In addition to its excellence as an interpreter, Montserrat Caballe has made a meticulous and enthusiastic research ovidado lyrical repertoire or almost unknown, como Armide de Gluck, The Danaides by Salieri, Sappho de Pacini, The Vestal y Agnes of Hohenstaufen de Spontini, Herodias Massenet, Cherubini Medea and demophon, Hermione and Il Viaggio a Reims de Rossini, Sancia de Donizetti y de Respighi's La Fiamma. Some of these titles are now common in operatic stages thanks to his curiosity and his pioneering work as disseminator of new scores. It is also known penchant for studying the works with facsimile editions, to appreciate all the notes of the composer.

In addition to its vast repertoire of classical music domain, Montserrat Caballe's curiosity led him to explore other types of sound universes, hand of some important artists like Freddie Mercury or Vangelis.

Caballé has numerous international prizes and awards, including the Order of Isabella the Catholic, Commander of Arts and Letters Francia, Academic Honor and Gold Medal of the Academy of Letters, Science and Arts of Italy, and since 1974 It is Goodwill Ambassador of the United Nations.