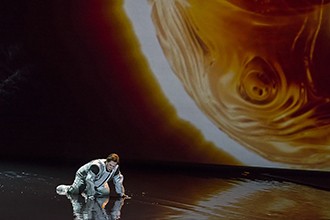 The Palau de les Arts Reina Sofia opens next 21 of April “Idomeneo”, from Mozart, "A man's journey into his soul", as he noted by the Mayor and stage director of this production, Davide Livermore, news conference.

Davide Livermore incardinated this title in the bid to diversify and expand the artistic story of Les Arts, after the excellent reception of Mozart's opera with titles such as "Don Giovanni", "The Marriage of Figaro", "Cosi fan tutti" or "Die Zauberflöte" ("The magic Flute") in its productions both in the Main Hall and in the Martín i Soler Theater since the theater's first Season.

The first new production of Les Arts in 2016 features scenery by Davide Livermore himself, wardrobe Mariana Fracasso, lighting Antonio Castro, videocreation D-WOK and choreography Leonardo Santos, that runs the Ballet of the Government.

Livermore has been inspired by a set of symbolisms that answer three questions posed by the work: "Who is God, where is the man and who is the monster ".

As explained by the Turin ‘regista’, "Mozart composes a deeply Masonic work, at a time when Freemasonry contributed fundamental concepts in the development of man, like freedom, fraternity and equality ".

"When Mozart gives voice to Neptune," Livermore continues- he is talking about an archaic god who says to man: Idomeneo, you will save yourself but for this you will have to sacrifice your son. It is an enlightened reading because the only one who can save man is man himself. Man can be both a god and a monster, we are capable of cruel actions and we also have the capacity to change ".

The stage direction proposes a contemporary contextualization, with elements and references to cinematographic jewels such as "2001 A Space Odyssey", from Stanley Kubrick, or other feature films that develop discoveries and actions 'on the road'. all, with a significant load of visual effects, like the sea, The rain, the storm and the hurricane ... "is a super production with super miracles in the budget, Livermore has pointed out ".

Fabio Biondi debuts in the Main Hall with his third Mozart at Les Arts. The head director of the OCV led for the first time the training with "Davidde Penitente" in the Auditori, and recently, in the same room, with his "Symphony Jupiter".

Para Biondi, "Idomeneo" is "the most dazzling of Mozart's scores at the orchestral level" and a "magnificent proposal for the quality of the OCV". The teacher has also pointed out that the inclusion of the ballets in the montage, by the Ballet of the Generalitat, It allows, also "the confluence of the forces of Les Arts".

"It was the first opera in his heart", continued Fabio Biondi, who also explained that there will be in the pit "a pianoforte and a harpsichord, of continuous instruments, that galvanize the operation in the musicological sense ".

He has been a master repertorist for Lorin Maazel, Zubin Mehta, Nicola Luisotti O Placido Domingo, work that has been made compatible with incursions in assisting the musical direction of teachers such as Roberto Abbado, Fabio Biondi, Riccardo Chailly, Ottavio Dantone in in the Valencian arts center.

The arts center brings together established stars, rising performers and young singers in "a cast of the highest level and balance", in the words of Davide Livermore.

Gregory customer stars in his second opera in Season X of Les Arts. American tenor, "One of the pillars of the theater's artistic project", as the Mayor has pointed out, embodies the role of Idomeneo.

His role allows the tenor to use the experience he has had in this life, "Well, it addresses very frequent questions to someone my age, the relationship with your god and your children ".

the mezzosoprano Monica Pods, one of the great ladies of the Mozart repertoire sings for the first time at Les Arts. Abbiati Prize of the Italian critics has worked for the main Italian and international theaters with a repertoire ranging from baroque opera, Mozart, to the French lyric of the 19th and 20th centuries.

The role of Idamante, the son of Idomeneo, how has Bacelli tinted, it was written for the ‘castratti’, but it is very common today that it falls on mezzo-sopranos. After passing through this production, the Italian diva, who has sung this work on numerous occasions, "He says he has worked on the depth of phrasing and expression like never before".

Carmen Romeu, Campoamor Award for his Musetta in "La Bohème" in 2012 in Valencia, regresa as Elettra. Artist with outstanding career in Spanish theaters, she is "one of the Valencian sopranos with the greatest international projection", has underlined the Mayor of Les Arts.

Asked about her character, Romeu stressed that “in Elettra you can see all the miseries of the human being, the music becomes stormy every time it appears on the scene. She is a woman who lives in a fantasy, his only link with the story of "Idomeneo" is wanting to achieve power through the love of Idamante. Is, definitely, the antagonist of the opera ".

the soprano Lina Mendes embodies Ilia. Artist of the previous promotion of the Center Plácido Domingo, the Brazilian singer performs her second role in the Main Hall after her Musetta in “La Bohème” which opened the first Pre-season of Les Arts in 2015.

The cast is completed with the current artists of the Center Plácido Domingo Emmanuel Faraldo (Arbace), Michael Borth (High priest) and Alejandro López (The voice).

The localities for "Idomeneo" oscillate between 15 and the 135 euros. In this sense, Les Arts recalls that the next day 19 there will be a special sales day ‘Arts for all’, with discounts from 50% for beneficiary groups of the ‘A space for all audiences’ program: Youth card holders, ISIC, retired, unemployed people, large families or citizens with a degree of disability greater than 33%.

The arts center also remembers that it maintains the "Last Minute" discount for this title., with a discount of 50% on the price of all the localities in purchases made 2 hours before the start of the performance on the same day of performance, Monday to Friday, Y 1 hour before saturdays, Sundays and holidays.

One morning with ‘Idomeneo’

On Sunday, 17 of April, to 12.00 h, Les Arts proposes its first activity aimed at family and intergenerational audiences: "A morning with Idomeneo", a practical workshop that explains to young and old the process of building an operatic montage from the heart of the theater, the stage of the Main Hall. The expected duration is 1 hour and 45 minutes.

The price of the tickets is 15 euros for the general public, 12 for subscribers and 7 euros for young people up to 20 years. As the main novelty, Les Arts introduces the Mentor rate (10 euros) for those who accompany a young person from their environment in this activity.

Attendees to "A morning with Idomeneo" will benefit from a discount from 50% in the purchase of tickets for this opera that premieres next 21 of April.

In addition, the participants in this activity, if you make a prior reservation, can enjoy a special menu in the restaurant "Contrapunto" for 20 euros presenting his locality of "A morning with Idomeneo".

Released on 28 of January of 1781 at the Residenztheater in Munich, two days after Mozart fulfilled 25 years, "Idomeneo" was commissioned by Carlos Teodoro, duke of bavaria, for the carnival of the Bavarian capital.

Giambattista Varesco, Salzburg court priest, was responsible for the preparation of the text - from the French lyrical tragedy "Idoménée", Antoine Danchet, with music by André Campra, which he endowed with a happy ending to comply with the prevailing tradition at that time.

The plot narrates the return of Idomeneo, king of crete, from the Trojan War. On the crossing, their ships are facing a terrible storm. Idomeneo asks the favor of the god Neptune to save his fleet, in return he will sacrifice the first being he meets when Crete arrives, what, to your misfortune, will be his son Idamante.