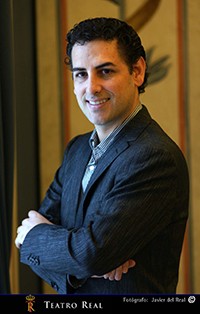 The next Monday 16 of November, to 20.00 hours, the Royal Theater will offer the second concert cycle REAL VOICES: a recital of Juan Diego Florez, accompanied by piano Vincenzo Scalera.

Since his performance in the season 2012-1013 The Royal Theatre, in which he played the role of Nadir in The Pearl Fishers, from Georges Bizet, Juan Diego Florez continues to expand its catalog, premiering two new operas every year and incorporating songs and arias into his concerts that allow him to explore and deepen an increasingly rich and diversified repertoire.

The program he will offer at the Real reflects that search for different styles and forms of expression. The first part will begin with the delicate and sophisticated songs of Henri Duparc (Sad song, Phidyle Y An invitation to travel), will continue with the wonderful love arias from Wolfgang Amadeus Mozart "My treasure", from Don Giovanni, and "A loving aura", from Così fan tutte,in which the tenor can show off his elegant phrasing and his famous bound, and will conclude with arias and songs by the composers who have consecrated it: Gioachino Rossini, of which he will interpret “Intesi, ah all understood ", from The turkish in Italy, Y Gaetano Donizetti, cuya aria "Tombs of my ancestors", from Lucia of Lammermoor,will reveal his exceptional gifts for the belcanto.

These two composers will return in the second part, which will be a tribute to Italian melodism, in which the known ones will not be lacking chants from Ruggero Leoncavallo Y Paolo Tosti.

At the end of his recital, Juan Diego Flórez will be available to the public for autograph signing in the foyer of the Teatro Real.