Kaspar Hauser. The orphan of Europe in the Canal Theatre 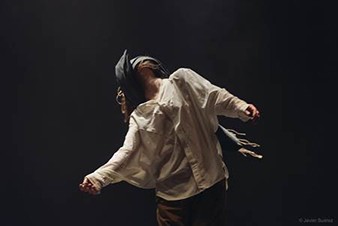 The company the pharmaco addresses the myth of Kaspar Hauser through a contemporary dance solo
Arcas Light, Critical Eye of Dance Award 2015 and one of the great promises of our scene, stars in the piece
Thursday 24 a meeting with the public will take place at the end of the performance, with free admission until full capacity

The Teatros del Canal of the Community of Madrid present the world premiere of the latest creation of the company La Phármaco, titled Kaspar Hauser. The Orphan of Europe, within the program of the XXXIII Festival from Autumn to Spring.

The montage, a contemporary dance solo that can be seen in the Black Room of the Teatros del Canal del 22 al 25 of March, It is performed and choreographed by Luz Arcas, Critical Eye of Dance Award 2015 and one of the figures with the most projection of the Spanish dance scene in recent times. Thursday 24, the artist will offer a meeting with the public after finishing the performance, with free admission until full capacity.

"Seeing everything with the eyes of someone who did not expect or need the world". This is how La Phármaco introduces the leitmotif of its new creation, that delves into the mysteries of the controversial character that gives his work its title, Kaspar Hauser, known as "the orphan of Europe". The piece is a physical spectacle that dialogues with History to reflect our time, dancing, as the formation itself affirms, "The poetic and wild nature of the human".

He 26 May 1828 a strange young man who barely managed to stand appeared as if out of nowhere in a square in Nuremberg. The boy, that he carried an anonymous letter with some contradictory information about his origin, was immediately welcomed by the whole country as a social experiment, political and philosophical. At six weeks he was speaking with some fluency and could read and write. It was learned that he had lived in a dungeon and that, until the moment of being found, I had never seen any human being. The doctors decreed that he was neither mad nor more retarded than the isolation caused by him..

With a special sensitivity for painting and horse riding, passionate about reading and music, Kaspar never figured out who was on the other side of the mirrors, neither did he manage to assimilate the idea of ​​the one God, Christian images repelled him and he hated Latin, he did not differentiate the dreamed events from the lived ones and attributed will to all inanimate beings. The young man was murdered in strange circumstances on 17 December 1833. On his tombstone you can read: Here lies Kaspar Hauser, enigma of his time. His birth is unknown. His death, a mystery".

About the work, the company advances: "In the dance of Kaspar Hauser, the motor of movement is always tragic: we imagine the peculiarity of its textures, that are born of extreme hypersensitivity, of a physical reaction against the real (Kaspar couldn't stand the light, could see in the dark, perceived the magnetic force of metals, animals and people and most scents hurt, sounds and tastes)”. But Kaspar Hauser embodies, especially, the natural conflict with "the other", involves dancing the relentless violence of the world with the intact nature of that boy known as "the orphan of Europe".

Since birth, in the year 2009, the pharmaco, with the dancer and choreographer Luz Arcas in front, it has been proposed to recover the classic concept of stage ceremony: the total show, where expressive elements meet and are tuned in the same tonality, committed to the message. The company believes that dance is not limited to a question of genres or styles, rather, their job is to try to make visible what was dark. Starting from the premise that dance is a cultured art, that dialogues with the fundamental voices of our History, Phármaco finds in the classics of world literature an appropriate mirror to reflect our time, while claiming the stage ceremony as a necessary mechanism, social and humanistic.

His creations include The Book of Poisons (2009, Injuve and Málaga Crea Award 2009), The monster with two backs (2010), Before it was always fire (2012), Thirst erodes (2012), Exodus: first day (2013, nominated for the MAX Awards and the Andalusian Theater Awards for Best Dance Show and Best Female Dance Performer and selected for the AECID catalog 2015) and the voice of never (2014, co-produced by the Andalusian Agency for Cultural Institutions and winner of the Best Female Dance Performer Award at the Andalusian Theater Awards in 2015).