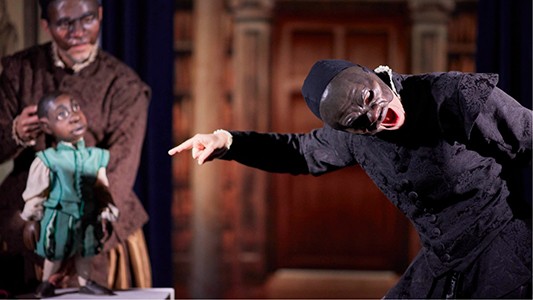 'The incredible story of Juan Latino', new production Claroscvro company and Teatro de la Zarzuela, is a bright music production, puppets and masks before which someone can not remain indifferent. It is a true story, little known, of that fraternal friendship we should all know and remember to understand how they are (as we are) humans. They offered 20 works to public from 6 years, and representations of the Saturday 18 and Sunday 19 from January (both at 13h00) will be open to the public.

'The incredible story of Juan Latino' is a small zarzuela, with Renaissance and Baroque repertoire, about a writer and authentic Spanish humanist of the sixteenth century; This is Juan Latino, the first black person who obtained a degree and issued a professorship at the University of Granada. He was famous and all praised her knowledge. Thus discovering a true story of racial and social improvement of a black slave in the Spain of the sixteenth century is a surprise for the viewer.

Therefore, in this music and theater festival, which it is a sincere invitation to tolerance and respect, you want to show how miscegenation has been a constant element in coexistence for centuries in our society. The music and the arts, as people and ideas, They have been combined in different ways in the works anonymous composers or the well known and admired Duron, Arrow, Gutierrez de Padilla, Hidalgo, Romero and Sanz.

The Spanish-Canadian company Claroscvro theater, one of the world references puppetry directed by Julie Vachon Y Francisco de Paula Sánchez, presents its second co-production with the Teatro de la Zarzuela after acclaimed 'Lost in Bosco' (2017 Y 2019). Claroscvro Theater employs recreation in the historicist aestheticism, with the purpose of reinforce the educational values ​​of their works, with the conviction that beauty is the perfect vehicle to love art. The work will 18 school functions (double day program 13, 14, 15, 16, 17, 20, 21, 22 Y 23 from January) to be attended by a total of 1570 children between 6 Y 10 years, and 2 family functions (18 Y 19 from January, to 13:00 h).