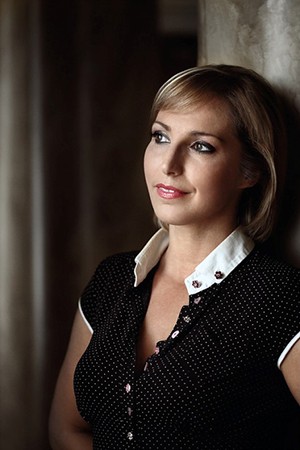 Praised by critics worldwide for its "Vehement and temperamental voice", singer debut in ABAO-OLBE in 2010 in Il Corsaro Verdi with the difficult role of "Gulnara".

Endowed with a great vocal range as a dramatic soprano of agility, personal and resounding timbre and a shocking emotional temperament, It is considered as a reference artist in the repertoire from Mozart to Rossini, from the most challenging bel canto to the young Verdi or Puccini the most lyrical, Vocal thanks to its solid technique and considerable volume of his voice, with means for the middle voices and filados, very beautiful. also it has a striking stage presence, and a natural ability to take their personal dynamic and compelling readings thanks to his talents as an actress.

His recent and upcoming engagements include: Rule Ferrara, Requiem Sophia Verdi, Così fan tutte in Mexico City, Aureliano in Palmira Y Eduardo and Cristina en el Festival Rossini one Wildbad, Jerusalem in Parma, Normto in Liege and The happy widow in Catania, Carmen in Liege, La Petite Messe Solennelle, Moses and Pharaoh Y Aureliano in Palmira one Festival Rossini one Wildbad, Summer concert in Liege, The Rover I do Modena, Moses en Egypt in Pisa and Novara, among other actions.

From Benetta sustituye in the inicialmente scheduled Angela Meade, who has canceled all future commitments due to illness certified by the office of the artist. ABAO-OLBE deeply regrets the unwillingness of American soprano who has moved his best wishes for a speedy recovery.