'The Elixir of Love', summer returns to the Royal Theater 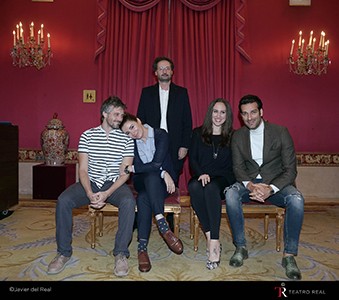 The Royal Theater offer, between days 29 October 12 of November, 12 its fun features production L'elisir d'amore presented in 2013 with an enthusiastic reception from the public.

This time, production designed by Damiano Michieletto -with some modifications in the scenery Paolo Fantin– musical direction will Gianluca Capuano, which will provide a close reading historicist and the interpretative provisions decimonónicos.

When, in 1832, Gaetano Donizetti (1797-1848) he was commissioned to write an opera precipitate in just 15 days to fill a gap in programming Milan Teatro della Cannobiana, had 34 years and 36 operas to his credit, including some big hits, as Anna Bolena.

His tragic and eventful life had given him many blows -the death of his wife and their three children, but its huge operatic production was growing at an overwhelming pace, only slowed madness, and in the final stretch of its short existence, Blinded by syphilis.

Starting from the opera Le Philtre, Auber, the famous librettist Felice Romani, with which Donizetti had worked in several works, He quickly sketched a fluid and very well articulated text, ideal for creative impetus composer.

Thus was born a masterpiece, in portentous inspiration, between comedy and drama, simplicity and depth, the opera buffa and romantic, parody and melancholy… and halfway between Rossini and Bellini. Archetypal characters inspired by the art commedy, They are growing up with melodic and breath dramaturgical music Donizetti, of the greatest efficiency in the development of action.

Damiano Michieletto moves the plot of the opera of the Basque countryside to the bustling Mediterranean coast, where the summer environment conducive seduction, party and vice. There, the pert Adina runs a bar where prowls his clumsy love Nemorino. Dulcamara, clever charlatan, trapichea drugs and concoctions. And entertaining coastal life no shortage of sailors looking for fun, captained by Belcore, the typical "beachy cool".

L'elisir d'amore has been one of the most beloved productions public of Real since the nineteenth century. He climbed his first stage in 1851, one year after the inauguration of the Teatro, and since then it has been performed over 80 times, including co-production of the Royal Theater and the Palau de les Arts in Valencia, now replenished, 6 years after its premiere in Madrid.