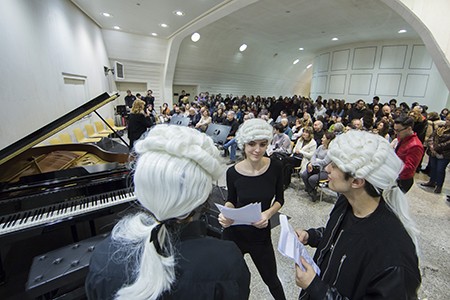 The Palace of Arts offers the 26 and the 27 from January 25 free activities in the different spaces and rooms of the building to celebrate Mozart's birthday with the third edition of 'Mozart night and day ’.

The educational program Les Arts channels this initiative 25 hours of continuous activity opera, show and symphonic concerts, recitals, chamber music, talks cafe, educational workshops, readings, cinema and a session with DJ around the figure of the Salzburg genius and his repercussion on the different artistic disciplines.

From the 20.00 hours of 26 January until 21.00 hours of the day 27, the Main Hall, the Auditorium, the Martín i Soler Theater, the Master Classroom, the Espai Los Toros and the lobbies of the theater halls will chain a complete program for all audiences that, except for educational workshops, They will be freely accessible until the capacity of the different enabled spaces is completed.

The launch of the third edition of 'Mozart Nacht und Tag' has been possible thanks to the selfless collaboration of artists and institutions: the Subdirectorate of Music of the Valencian Institute of Culture; the University of Valencia, through the departments of English and German Philology; the Joaquín Rodrigo Conservatories (CSMV), José Iturbi and number 1 of Valencia; as well as the Lluís Vives Secondary Institute, the Center Placido Domingo, a UNIT, DJ Eduardo Díaz, OCV soloist Susanna Gregorian, Gourmet Catering & Spaces and Tossal Productions.

The activity starts at 20.00 hours of 26 January with the first performance of the concert show ‘Lumina’, first collaboration between Les Arts and the Subdirectorate of Music and Popular Culture of the Institut Valencià de Cultura.

Hilari García conducts the singers of the Center Plácido Domingo and the Jove Orquestra de la Generalitat Valenciana in this show with stage direction by Allex Aguilera, that links fragments of Mozart's operas with light as a common thread.

In parallel form, 35 Primary Education students, that belong to the Professional Conservatory of Music of Valencia, they will arrive at the theater, around the 20.45 hours, to spend a night at the Palau de les Arts and learn more about the figure of Mozart thanks to the work of students of the university master's degree in Secondary Education Teacher, organized by the Department of English and German Philology of the University of Valencia.

At 21.30 hours, the lobby of the Teatre Martín i Soler will host a reading accompanied by piano of Mozart's letters, carried out in collaboration with the German Language students of the Lluís Vives Institute, which will be followed by a violin recital by the teacher of the Orquestra de la Comunitat Valenciana, Susanna Gregorian, at the Teatre Martín i Soler at 22.45 hours.

Y, while the little ones get ready to go to sleep in the Main Room, the lobby of the Teatre Martín i Soler will be transformed into a lively café to chat about Mozart's letters and exchange opinions on the figure of the Salzburg genius in a debate organized by UNED.

Starting at midnight, Les Arts proposes two alternatives for the most late-night public: opera or music session with DJ. The Teatre Martín i Soler will become a cinema for 380 people with the projection of the opera ‘The Magic Flute’ broadcast from the Garsington Opera House through the OperaVision portal.

Y, meanwhile, the hall of the Aula Magistral will be transformed into a unique dance floor with a music session with a DJ on the work of Mozart, with DJ Eduardo Díaz as the creator of the show.

The morning of the day 27 start with breakfast, in the main hall, of the little ones who have spent the night in the Main Room. Activity, courtesy of Gourmet Catering & Spaces, puts an end to the didactic workshop.

Starting at 11.00 hours, artistic activity is resumed with an uninterrupted cycle of concerts and recitals in the main scenic spaces of Les Arts.

While the students of the Joaquín Rodrigo Superior Conservatory of Music star in a recital with arias and fragments of the composer's most popular operas in the Aula Magistral, Espai Los Toros welcomes students of string instruments from the same institution to interpret the ‘Quartet for strings in D minor K 421’ by the genius from Salzburg.

The CSMV Joaquín Rodrigo Symphony Orchestra, meanwhile, will debut at the Auditori de Les Arts with a symphonic concert at noon, which will include pages such as ‘Concerto for piano and orchestra in D minor number 20’ and the motet for orchestra and string ‘Exsultate, Jubilate’. How to close the program, the orchestra will pay tribute to Salvador Giner, essential figure in the start-up of your musical training center.

The Martín i Soler Theater, nerve center of the Mozart marathon, presents at 13.00 hours ‘The businessman’, a production of Tossal Producciones del ‘singspiel’ ‘Der Schauspieldirektor’, that the genius composed as a commission from the emperor for festivities at the Schönbrunn Palace.

It is one of the lesser known operas by the Salzburg composer. The libretto narrates the vicissitudes of an opera impresario to carry out a montage in the time of imperial Vienna. Manuel Pérez Múgica musically conducts this unpublished work in Les Arts, that brings together alumni of the Center Plácido Domingo under the stage coordination of Zvonimir Ostoic.

Simultaneously, the arts center continues with its offer of concerts and recitals, which include a string quartet made up of CSMV students with the work ‘Las disonancias K465’, to 13.15 hours in Los Toros, and a chamber music proposal in the Aula Magistral with ‘Trio for clarinet, viola and piano in E flat major K 498 ’.

The also known as ‘Kegelstatt Trio’ can be heard again at 19.00 hours also performed by students from this conservatory on the same stage.

After the midday break, to 15.30 hours the activity is resumed in the Master Classroom. Students of the Professional Conservatory of Music number 1 de València offer a selection of fragments from one of the composer's most appreciated and performed operas: 'The Marriage of Figaro'. For those interested, the arts center informs that the show will be re-enacted at 16.45 hours.

Joaquín Rodrigo's students star in the evening offer of recitals and chamber music, starting at 16.00 hours at the Teatre Martín i Soler with the second voice and piano recital of this Mozart marathon. Thirty minutes later, CSMV instrumentalists will perform at the Espai Los Toros ‘Quintet with clarinet in A Major, K. 581' and to the 17.45 hours, Theater in Martín i Soler, will offer one of the most popular scores: "A little night music K525".

The second screening of the concert-show ‘Lumina’, made in collaboration with the Music Sub-Directorate of the IVC and the Plácido Domingo Center, will close the edition of 2019 de ‘Mozart night and day’.