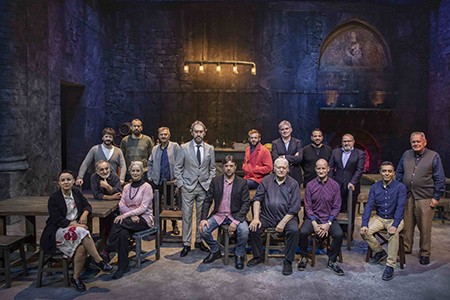 The Palace of Arts debuts 'The barmaid port', Paul Sorozábal, on Sunday, 27 October, in the Main Hall, dentro del apartado programming of 'Les Arts is Zarzuela'

"As I announced in my presentation, zarzuela will have a constant presence at this stage, hence having own heading into the season. This is a genus our, we must recover, promote and dignify ", Iglesias explained Noriega.

"Therefore -HA continuado- has chosen a representative title and is considered one of the last great operettas of history, we present, Besides, with the best artistic Mimbres ".

Musical direction lies Guillermo García Calvo, one of the conductors with the largest presence in the Vienna State Opera, where he has directed more than 200 representations. Madrid takes charge of stable bodies of Les Arts, Cor de la Generalitat and the Orquestra de la Comunitat Valenciana, and a cast of specialists in gender.

García Calvo, who worked with the OCV in 2013, He underlined the high quality of the score, “comparable a Ravel y Debussy, in which each measure is an absolute gem ". In this sense, Madrid director has also noted the genius of music, able to captivate both the novice spectator and the public most erudite.

Mario Gas, one of the biggest names in the national scene, This production company Teatro de la Zarzuela, which he has received praise from audiences and critics since its premiere last year in Madrid.

International career professionals make up the creative team, with Ezio Frigerio y Riccardo Massironi in stage design, the winner of an Oscar Franca Squarciapino in the dressing room, Vinicio Cheli in lighting, Aixa Guerra for stage movement and Álvaro Luna responsible for the projections.

The actor, director and cultural manager also recalled his relationship with this zarzuela, to which it is linked even before birth, since his father was playing the role of Simpson when he was born.

"This is an adventurous script, Fantastic, set in a dark and gloomy place, perfect setting for blasphemies, which contrasts with the desire for freedom of the main characters, and where the notes are not lacking humor ".

The demand for interpreters is high, as pointed Mario Gas, since not only we need singers who are actors, but also actors who are singers.

'The barmaid port' is set in the imaginary coastal town of Cantabreda, in the port, Marola where the tavern is located. No one knows its origin, just they know that their business was funded by the bandit Juan de Eguia, whom everyone believes her husband.

Leandro, a local fisherman, He falls in love with Marola. At the same time, Abel, an accordionist, also it falls for her charms, although it is not reciprocated. The village women are fed up and criticize Marola to return men mad city before the glare of Juan de Eguia

The Palau de les Arts reserves the premiere of this zarzuela, on Friday 25 October, to under 29 years, within the new proposal 'Previews fins 28', which begins this weekend.

As he explained by the artistic director of the theater, Jesus Iglesias Noriega, The purpose of this initiative is that "young audiences recognize as part of Les Arts, why we dedicate exclusively a function. With the exception of staff to the public, there will be no greater than 28 years that day in the Main Hall ".

Les Arts in Valencia introduces a proposal that enjoys great acceptance in major European opera houses and, with a symbolic price of ten euros by location, It aims to incorporate the lyric on the agenda of leisure activities of young people.

Next Monday, 28 of November, Les Arts launches a new round of talk shows around the lyrical productions of the season 2019-2020. Under the name of 'Perspectives', and with the collaboration of Friends of the Opera and the Arts, Guillermo Garcia Clavo and Mario Gas will hold a conversation with the audience to this free initiative in the Aula Magistral.