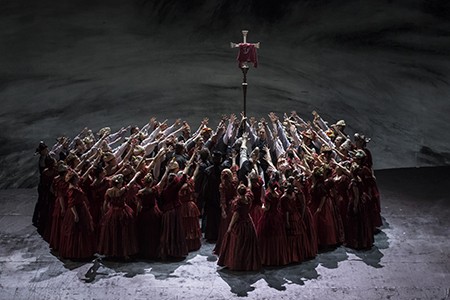 He Palau de les Arts Reina Sofia opens Friday, 1 February, ‘Peter Grimes’, Benjamin Britten, one of the masterpieces of the twentieth century, plus the best English opera from 'Dido and Aeneas' by Henry Purcell (1689). Christopher Franklin, in the pit, Y Willy Decker, as a stage director of this production of La Monnaie Theater (Brussels), They address the first opera Les Arts in 2018. An event that involves, Besides, the stage debut Gregory customer in the role of tormented sailor, stigmatic, persecuted and doomed to suicide for alleged abuse their apprentices.

Benjamin Britten addressed in 'Peter Grimes' two recurring themes in his legacy: the confrontation of an individual with society and the loss of innocence. Through the figure of the protagonist, English composer explores the psychological effects of exclusion on those who contravene the conventional codes.

This point was the musical director, Christopher Franklin, It is highlighting the "contemporaneity" of the work. "It's not an opera about myths, nor about dragons, princesses, cuts or kings ... but it is an issue that, nowadays, It is still very current, how society, like an everything, reacts against an individual ".

musically, Benjamin Britten boasts a great dramatic flair to unite on the staff different environments by transiting 'Peter Grimes', from raves to outbursts Fisherman, folk songs at the inn Auntie, Sunday storm or singing in church, giving the sea an unusual prominence as a character played by the orchestra, continuous and present witness human drama.

Franklin, who runs his second work by the English composer in Valencia after 'The Turn of the Screw' in 2017, It adds that it is "almost Wagnerian opera, in the sense that the chorus as the chorus used in Greek theater: It is a reflection of society ".

After his celebrated 'clock Traviata', that wowed at the Salzburg Festival and arts center scheduled within the bicentenary of Verdi, Willy Decker presenta ‘Peter Grimes’. A dedicated mounting Director, with scenery and costumes by John Macfarlane, Trui Malten lighting and choreography by Athol Farmer, which he has received unanimous praise from critics and audiences since its premiere in 1994.

Decker emphasizes the role of the sea in its proposal, a sea that "determines in its violence the behavior of men". Their violence is reflected in the violence of men and their deeds: the land and the sea, the man and the nature, They are caught in the grip of each other ... In all feelings, mainly in anguish and desires, It is always present ".

For staging, the 'regista' German uses images of "its vastness and violence and represents the effects produced by the sea in the souls of men".

"A paper with dreams all tenor"

Since she sang her first 'Otello' in Spain under the direction of Zubin Mehta at the Mediterranean Festival of 2013, Gregory Kunde is one of the artists of reference in programming Les Arts, destacados with debuts in Valencia, Don Alvaro in 'La forza del destination' or the leading role in 'Samson et Dalila'.

The American tenor and sang in 2013 concert version of this opera under the direction of Antonio Pappano. A performance that earned him comparison with himself Sir Peter Pears, tenor and lover Benjamin Britten for the English genius composed this paper, and who premiered the work the 7 June 1945 at Sadler's Wells Theater in London.

At his first performance of 'Peter Grimes', Kunde equate character with another determining factor in your current career. "For me it's like 'Otello' by Verdi: a role with which all dreams tenor ".

"It's the best job he continues Britten. We know many other titles: ‘Death in Venice’, ‘Billy Budd’… but, In my opinion, This is the masterpiece of his operas. And speaking of century XX, I would say that is one of the five best of the century. Nobody considers modern opera, because it has become part repertoire, which it is fantastic ".

Leah Patridge encarna a Ellen Orlford, the master of the people and the most fervent defender of Grimes. This is his second visit to Les Arts after singing the role of Helena in "A Midsummer Night's Dream 'in 2016 Roberto Abbado.

American soprano believes that singing Britten's work is "life changing experience". "Once with your musical skills you manage to appreciate and Benjamin Britten work, You feel like another world accedieras expression ", Explain.

"Every time I hear this work amazes me how he could think of writing… The way that captures the sea, the morning, Plasma how the scene at the inn Auntie ... In his music, everything is very visual. There really creepy moments and other provocateurs. I never get tired of listening to this music, or cantarla ".

Rosalind Plowright plays Mrs. Sedley, "Bad history", in the words of the diva own, which deals with this paper what she calls his "third career" after 35 successful years on stage.

"She exaggerates everything much more, and really he wants to sink Peter Grimes ", apostil.

Les Arts premiere 1 February 'Peter Grimes', the second title of Britten presented in the Main Hall, después de ‘A Midsummer Night’s Dream’. The remaining functions will take place on 4, 7, 10 Y 13 of that month.