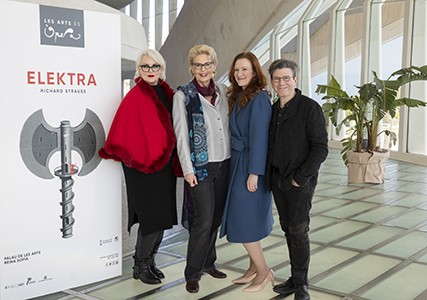 He Palau de les Arts gathers Marc Albrecht and Robert Carsen in 'Elektra', from Richard Strauss, the first operatic title 2020, which opens next 18 from January.

The German conductor and creator reputed Canadian debut at Les Arts with this work, key element in the programming of the great opera houses, for the arts center meets, Besides, three of the leading interpreters of this title: Irene Theorin (Elektra), Doris Soffel (Klytämnestra) y Sara Jakubiak (Chrysothemis).

‘Elektra’, as he has explained Jesus Iglesias Noriega news conference, It is a full artistic statement of this new stage of Les Arts.

"On the one hand, It is the return to the programming of the German repertoire, with the operatic center and the Orquestra de la Comunitat Valenciana (OCV) They have reaped their greatest hits, and also the presentation for the first time to our audience of eminent directors, singers and artists usual in the great opera circuit ", It noted.

artistically, 'Elektra' is a challenge for any theater for his musical and dramaturgical demands, both the OCV which will be made on this occasion by 103 musicians, as well as for technical equipment and production, and the choice of the cast.

Winner of the Opera Award for best musical direction 2019, Albrecht stands as one of the conductors enshrined in the work of Wagner and Strauss. Teacher born in Hannover Strauss piece can be considered as "the gateway of modern music".

"It's a very interesting piece of the early S. XX. It is a singular score in the world of opera for many issues, for violence not only on stage but also musical. The whole opera is like a shout, a panic attack, where there are musical moments of great intimacy ", Explain.

Albrecht highlighted, Likewise, duration as an aspect of modern of Elektra. "It's all in 100 minutes of music, there is a concentration of harmonies, action, speed, still it sounds like a totally current work if interpreted correctly ".

Robert Carsen, presented to the Valencian public a production of the Opéra National de Paris, based on an original co-production of the Theater of the Maggio Musicale Fiorentino and Tokyo Opera Nomori, with scenery Michael Levine, wardrobe sight Matusz, own lighting Peter van Praet and choreography Philippe Giraudeau.

Renowned for his great showmanship and aesthetics maintained their mounts, Carsen offers a chilling vision of 'Elektra', expressive of great strength and deep symbolism.

Robert Carsen considers Elektra Strauss's masterpiece. "Its premiere was a shock and still remains whenever depicted. It is a milestone in musical theater ".

Specifically, Canadian director pointed to linking the opera by Richard Strauss with his time and the validity of the psychoanalysis of Sigmund Freud with issues such as family, Dreams, paranoia ....

"The work focuses on the living nightmare Elektra in her head completely innovative way. His character never leaves the stage, We are within his soul. In the music he writes Strauss is all she feels and thinks ".

In this sense, Robert Carsen production explained that introduces a set of 20 dancers around Elektra as a theatrical element that amplifies feelings, fears and emotions of the protagonist.

Irene Theorin, critically acclaimed in the leading role, He plays the vengeful daughter of King Agamemnon, the most complex paper written by Strauss for soprano, not only for his wide vocal range but for its requirements on stage.

Likewise, Swedish interpreter has stressed the importance of female characters on male, both in number and in stage presence, in a work that contravenes the trend of previous operas.

La mezzosoprano Doris Soffel encarna and Clytemnestra, widow, conspirator and assassin of Agamemnon. German diva is one of the most prestigious Wagner and Strauss interpreters of our time and treasures his long career and extensive discography, more than 60 edited albums.

Soffel, which had its first contact with score 1975, with the legendary soprano Astrid Varnay as Klytämnestra, claims an interpretation of Elektra's mother away from the female monster of Viennese tradition. Instead, He proposes a real woman in three dimensions, with feelings, thoughts and passions.

Close the protagonist trio, American soprano Sara Jakubiak emerging in the role of Chrysothemis, sister Elektra. With an important race in Germany, Sara Jakubiak debut in Valencia this papel, that within a few months will involve presentation at the Covent Garden in London.

The premiere of 'Elektra' will take place on Saturday 18 from January. Les Arts has scheduled four other functions of Richard Strauss's opera day 21, 24, 27, Y 30 from January.

Today, Friday, 10 from January, Ramon Gener explain the intricacies of Elektra from the 19.30 h in the Auditorium, in a paper-I show free access. Meanwhile, the next day 14, Aula Magistral host a new edition of 'Perspectives', in which the public will have the chance to ask and hear the impressions of the stars of this production, moderated by Javier Monforte, Friends of the Opera and the Arts in Valencia.

He 28 from January, in collaboration with Les Arts Berklee College of Music, you can enjoy, also free, of 'Greek mythology and its validity through music' in the Aula Magistral.