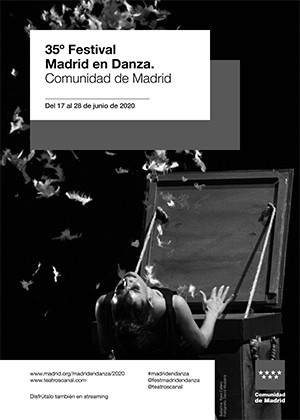 Theaters Canal Madrid curtain up again next time 17 of June, Thus becoming the first theater in the region and one of the first in Spain to recover face-to-face activity. They will with the 35º edition of the Madrid festival in Dance, to be held 17 al 28 June in the Red Room and will feature, Besides, with programming in streaming.

The director of the Teatros del Canal, Blanca Li, He has expressed his enthusiasm for resuming the activity highlighting that “we return with dance, one of our hallmarks, and with the 35th edition of the festival Madrid en Danza, which is one of the benchmark festivals in the sector and a classic in our venues”. further, has explained that “at the Canal Theaters we have exceptional facilities: 35.000 total square meters; and specifically with two rooms, the Red and the Green that, for its capacity and configuration possibilities, allow the public to return in compliance with all necessary security measures. Precisely for this reason it was our obligation to do it as soon as possible and we are sure that the public is as eager or more than we are to return to the seating area.”.

The Minister of Culture and Tourism, Marta Rivera de la Cruz, He has participated today in the reopening of the center and has stated that "it is a double reason for joy to reopen the Canal Theaters and do so with Madrid en Danza, one of our most established festivals and one of the most awaited annual appointments by the public. Opening the Canal Theaters is not only a joy: it is also an obligation. These theaters are, as well as the flagship of culture in Madrid, a public service ”

Likewise, given the security measures and the limited capacity, "We will incorporate the emission in streaming of the shows, so that everyone has the opportunity to enjoy the art of the great dance figures that we have selected ”, the counselor has continued. And is that, in this edition, The festival is committed to bringing a poster that focuses on the acclaimed national creation inside and outside our borders to the viewer, with big names like Olga Pericet, Israel Galván and Sara Calero, among others.

Aida Gómez, festival director, has insisted on the need to act responsibly in this face-to-face reunion with the theater "in order to enjoy with all the guarantees of a return to cultural life". In this way, the reopening of the center will take place under strict safety and hygiene measures, through a protocol created for this purpose and which guarantees security, both the public and its workers.

Said protocol, accessible to the public on the Teatros del Canal website, includes measures such as the mandatory use of face masks within the premises, to keep security at a distance -for which seats have been blocked in all seats capacity-, disinfection of rooms at the end of each function or prioritization of digital inputs. In this sense, a deep disinfection has been carried out by a specialized company that has used virucide nebulizers in the 35.000 m2 of the complex. (GRAPHIC MATERIAL AVAILABLE)

A MADRID IN DANCE MORE ALIVE THAN EVER

The Community of Madrid, in this special edition of the festival Madrid en Danza, will feature a duet and a selection of five individual pieces, in which live music will take on special relevance.

A) Yes, Israel Galván will raise the curtain on 17 June with the Madrid premiere of The love wizard. Gypsy in one act and two paintings, a free creation ‘that shakes the soul’ on the tragic composition of Manuel de Falla, in which he is accompanied by the singing of David Lagos and the piano of Alejandro Rojas-Marcos. Galvan, an artist who has revolutionized the conception of flamenco shows, presents a Amor brujo raw, without orchestration and without dance corps, only with the scenery of a piano and a throat.

In the next show, Sara Calero will present, he 19 of June, the absolute premiere of his latest creation, Fandango Avenue, in which the dancer approaches the fandango, one of the most important musical and dance forms of the Iberian Peninsula, from his particular aesthetic syncretism. For that, Calero proposes as a context for his expressive language the spaces of a deeply modern and cosmopolitan city, How could the New York of the years be? 50, at the height of the golden age of musicals and at the height of classic cinema, with the bustling Broadway, Times Square and Fifth Avenue.

Meanwhile, Olga Pericet will arrive at Teatros del Canal on 21 June with An infinite body, a show around the figure of Carmen Amaya, one of the greatest flamenco dancers in history. Pericet thus proposes a dialogue between the two and approaches the greatness of the disappeared artist from her own way of understanding flamenco dance..

In another of the creations, Marco Flores and Ignacio Prego will bring the public closer Origin he 24 of June, a project takes us into a fantasy world in which old music and flamenco dance go hand in hand from a vision free of orthodoxies and purisms. it 2020, Marco Flores is a finalist in the Max Prize for the best male dance performer for Origin.

To continue the festival, Metamorphosis Dance and its Naked will reach Canal on 26 of June, a new project that aims to show the public the pillars that underpin the creative process of the artists that make up the company: Iratxe Ansa and Igor Bacovich. It is a contemporary dance show that approaches the couple's creative instruments with the help of visual artist Danilo Moroni.

Finally, Rocío Molina, one of the Spanish artists with the greatest international projection, will be in charge of putting a finishing touch to the festival on 28 June with Fallen from heaven, a piece with which she celebrates being a woman and with which she demonstrates, once again, that flamenco is a free expression that cannot, nor should, be tamed.

further, there will be no shortage of meetings between the public, the creators and the sector, with the idea that the entire profession has its voice at the festival, sharing ideas, efforts and synergies. A) Yes, The most relevant dance event of the Community of Madrid will schedule two talks to address future prospects after the crisis: CHow has dance evolved historically afteriss of a crisis (Thursday 18 of June, to 20:00 hours), moderated by Antonio Parra, with Roger Salas, Julio Bravo, Cristina Marinero and Olga Baeza; Y Different perspectives of futurO (Tuesday 23 June, to 20:00 hours), moderated by Aída Gómez, with Chevi Mudaray, Manuel Segovia, Ruben Olmo, Antonio Canales and Sergio Bernal. Both will be held in the Green Room of Teatros del Canal.