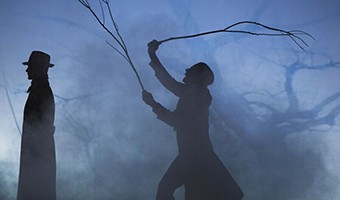 Canal Theaters Community of Madrid presented the premiere in Spain of Letter to a man, mounting directed by Bob Wilson and interpreted by Mikhail Baryshnikov which will be in four unique functions in the Red Room of 12 al 15 of May.

The iconic director Robert Wilson and the legendary artist Mikhail Baryshnikov have joined artistic forces to create a new one based on the famous dancer and choreographer daily work Russian Vaslav Nijinsky, what, at its best, He was recognized as the most famous dancer in the Western world, acting with the renowned Ballets Russes Sergei Diaghilev.

Letter to a Man It is a play by Mikhail Baryshnikov, entering the fragmented mind of the great artist Vaslav Nijinsky dance while falling into madness. As always in the movements of the works of Wilson, text, lights, set design and music are equal parts of the same creation, where, as he says, “All is dance theater”.

The play, from the daily dancer, places the action in Budapest 1945. He and his wife have found shelter with family. These are the last weeks of World War II and the battles between German and Russian soldiers are given with rabies in the ruined streets. Nijinsky's mental health had broken down in Switzerland at the end of World War I.. His diaries are an extraordinary document of their struggle to avoid falling into madness and understand what was happening to him. When he stopped writing her diary, he locked himself, as in a grave. There he remained for more than two decades, vigiladaopor his wife. But as a new catastrophe in Europe comes to an end, the great artist seems to be coming to life again.

The project is the second collaboration between Wilson and Baryshnikov, Daniil Kharms whose production The Old woman, with Baryshnikov and Willem Dafoe, He has had great critical acclaim in national and international tour.