Luisa Miller, in Verdi, returns to the Royal Theatre 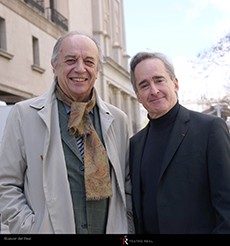 Luisa Miller, from Giuseppe Verdi (1813-1901), will return to the Royal Theater in two only performances in concert version the days 23 Y 26 of April to 20 hours, under the expert baton of James Conlon, and with a leading trio that unites the veteran baritone Leo Nucci with two young singers who will debut in Madrid: soprano Lana Kos, in the title role, and tenor Vincenzo Costanzo, as Rodolfo. They will be seconded by the low Dmitry Belosselskiy Y John Relyea, of powerful you, and the spanish mezzo-sopranos Maria Jose Montiel Y Marina Rodriguez-Cusi. Together with them the Headlines Choir and Orchestra of the Teatro Real, that these days the functions of Verdi alternate with those of Parsifal, Wagner.

Despite the success of the premiere of Luisa Miller at the Teatro San Carlo in Naples in 1849 and the numerous performances that took place in the immediate aftermath, this Verdi opera, the 14th in its catalog, was gradually leaving the stages, being postponed by other more popular titles of the composer. This unjust oblivion is due, maybe, to the characteristics of the libretto and its undervalued score, and also to the place it occupies within Verdi's operatic production: is a work of transition between the first and second stylistic period of the composer and, especially, happen it, in the next four years, the famous Verdi trilogy: Rigoletto (1851), The Troubadour (1853) Y La traviata (1853).

With Luisa Miller Giuseppe Verdi stands at a crossroads between the use of structural conventions, Stylistic and plot prevailing in the booming Italian operatic creation in the mid-nineteenth century, and search and exploration of new ways to flourish in later works, and that appear above all in the magnificent third act of the score.

Luisa Miller is Verdi's third opera based on works by Friedrich von Schiller (1759-1805), after Giovanna D'Arco e I Masnadieri. Later, the composer would return to his admired writer with Don Carlo. the libretto, from Salvadore Cammarano (1801-1852) —Perhaps the most prestigious and sought-after librettist of the time, who worked with Verdi on four operas—, privileges the love and social drama of the characters to the detriment of the revolutionary and political ardor that enshrines the original literary work, cabal and Love (Intrigue and love), apostilled by the author as "bourgeois tragedy". With this dimension, Schiller moves the archetype and sap of classical tragedy - whose suffering and injustices inspire compassion or fear - to a closer contemporary context, where power and class struggles survive, and the contrast of the most sublime and the most despicable feelings.

Written in the period of effervescence of the revolutionary movements that shook Europe in 1848, the libretto dodges with agility the imperatives of the strong censorship of that time, but it keeps the essence of the drama: how the arrogance of the powerful and the arbitrariness of their conduct determines the fate of the weakest, whose only and last refuge of individual freedom is voluntary death.

If in Verdi's operas the figure of the father, with his inner struggle between affection and duty, between honor and love, occupies an important role - reinforced, in many cases, by the absence of the mother - in Luisa Miller there are two fathers who embody the power conflict of the plot and also the dichotomy between the conservative values ​​of the nobility and the desire for free thought that the growing bourgeoisie claimed: Miller, the father of the protagonist, old retired soldier, advocates free choice of spouse for her daughter, based on love, while the Earl of Walter and his insidious henchman Wurm, put power and lineage before any other value, feeling or even life.

From the compositional and dramaturgical point of view Luisa Miller also materializes, although in a latent way, the struggle between the subordination of music to the structure of Italian serious opera in vogue in the mid-nineteenth century and the need to transcend, from inside, the formal limitations of the sequence of arias, cabalettas or duos, privileging the expression of more personalized feelings, intimate and deep, and the construction of more complex characters.

For that the orchestra grows in autonomy, harmonic richness and descriptive and evocative capacity, as reflected in the overture of Luisa Miller, that anticipates the findings of the third act, where you can guess the great Verdi of his future operas.

With Luisa Miller will return to the Royal Theater the great Leo Nucci, that last December he obtained an unforgettable triumph at the Teatro Real, with encores in all functions of Rigoletto who interpreted. At 74 years, The Italian baritone will once again incarnate on the stage of the Real one of the anguished Verdian parents: after his unforgettable Giorgio Germont, Alfredo's father in La traviata (2015), and his devoted interpretations of Gilda's desolate father in Rigoletto (2009 Y 2015), Nucci will now be Luisa Miller's kind father, that he will have to live once more the death of his daughter, naive victim of political struggles, classist and personal alien to their feelings.

After the staged version of Luisa Miller in 2005 (Jesús López-Cobos / Francesca Zambello), this opera returns now without the support of the scene, which will allow the viewer to concentrate on the musical and dramaturgical richness of the score, as James Conlon explains in Revista del Real: “I love the concert versions, and in fact I think they often convey essential dramatic values ​​even better than staged productions. Let's not forget that the first playwright is the composer. Verdi's musical and dramatic genius is impressive. The concert versions allow the audience to feel the impact of the musical drama in a very special way..”