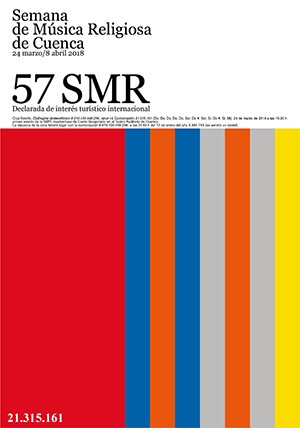 Religious Music Week in Cuenca, Easter festival par excellence of Spanish music scene, will hold its edition number 57 of the 24 March to 8 of April, with an extensive program, in which outstanding performers cites national and international prestige will.

In his second year as artistic director of the Religious Music Week in Cuenca (SMR), bandleader Christopher Soler He is betting on "a sustainable project, in which prime excellence and quality, as well as a varied program, open to all public, with the aim of preserving tradition representing over half a century of existence, a new impetus, connecting the past with the novelty: SMR Academy, that make up the Choir, Orchestra and Soloists of the SMR "

SMR-ANTIGUA (Between light and darkness)

Recovery sacred heritage of the Cathedral of Cuenca: Release in modern times of Mass policoral (Mass 8 without a name) the choirmaster Alonso Xuárez de la Fuente (1640 – 1696), with SMR Academy Choir and the Choir City of Cuenca, directed by Carlos Lozano; Juan Carlos Asensio and Schola Antiqua present Vespers at the Cathedral of Cuenca, The Feast of the Annunciation of Our Lady

Francisco Coll, resident composer 57 SMR will present his work, and direct the Composition Workshop Academy SMR, in which six young composers will present their creations, based on the reason Day of wrath, of the Requiem Mass, and hold talks with six young conductors. José Luis Temes, will present "Light Project: Spanish symphonism illuminated ", with the projection of movies Obsequies for Fernando Zobel, with music by José Luis Turina, Y Nursery rhymes, with music of Maria Rodrigo. Cruz Novillo, will present its concert "Cronocromofónico", a synesthete exercise of sound and color

The orchestra, choir and soloists will perform the SMR Requiem Mozart in Tarancon, Talavera de la Reina and Valdepeñas.