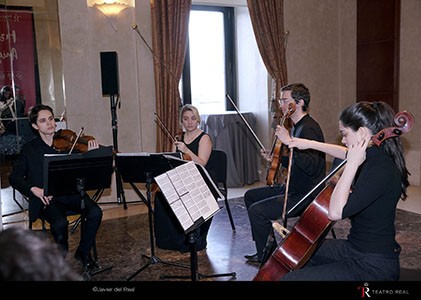 He Teatro Real and the Queen Sofía College of Music have signed a collaboration agreement thanks to which the users of the audiovisual platform My Opera Player they will be able to enjoy new musical and educational content performed by those who represent the future of this universal art.

this initiative, that broadens the long-standing bond between both institutions and strengthens the joint project for the dissemination of music and the performing arts, offers a double chance to hear, on the one hand, the concerts in which the students of the Reina Sofía School of Music Y, for another, discover details of interpretive technique through master classes offered by renowned professionals such as the cellist Asier Polo (former student of the School), the violinist Oliver Wille, clarinetist Pascal Moraguès (school teacher) or great singing figures like the tenor Javier Camarena or baritone Leigh Melrose.

The Royal Theater wants to commit itself even more in its commitment to talent and young audiences, being the speaker of the teaching project of one of the most important music schools in the world through the concerts recorded in the Sony Auditorium of the Reina Sofía School, in Madrid, and in the Botín Center of Santander, among others. Symphonic concerts, chamber music, recitals and lyrical sessions will show the work of the new musicians.

The schedule is available in My Opera Player starting today, Friday 30 of April, with the presentation of two concerts performed by the students of the Reina Sofía School of Music for the Young Talents Cycle of the Banco Sabadell Foundation, with Vincenzo Bellini and Antonín Dvorák as protagonists, and a session called "Musical reunion with views of the sea" in which the extraordinary pianist Pallavi Mahidhara - former student of the School- and the young cellist Hayk Sukiasyan.

In addition to musical performances, the contents will be completed with the first two master classes; one of them by Asier Polo, in which he will reveal the essence of Brahms and its codes, and another given by the violinist and co-founder of the Kuss Quartett, Oliver Wille, who will share their knowledge about Beethoven.

The contents will increase in the coming months, with new recordings and teaching activities, that will allow to expand the musical knowledge and diversity of its interpreters.