Warning: Invalid argument supplied for foreach() in /homepages/0/d272755006/htdocs/wp-content/themes/responsive/core/includes/customizer/controls/typography/webfonts.php on line 80 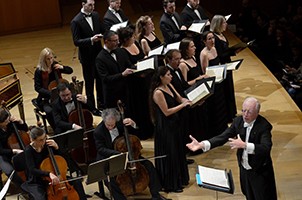 The Christmas concert of the 47th season Ibermúsica It will feature the French group Les Arts Florissants and the legendary bandleader, William Christie. Together they will perform one of the most popular oratorios about the life of Jesus of Nazareth: The Messiah, from Haendel, next Wednesday 21 from December, to 19:30 hours, at the National Auditorium of Music in Madrid. grouping, recognized for rescuing from oblivion the French baroque repertoire, will address one of the most impressive and symbolic works of that time.

The Messiah It premiered in Dublin 1742. Since then and throughout his life, Haendel directed each year their representation at Covent Garden in London during the Easter period. The work was written with unusual speed (between three and four weeks) and there is no definitive version, Haendel then rewrote several of its parts to suit different soloists concerts. Although the bulk of the oratorio addresses the death and resurrection of Jesus, during the nineteenth century became popular as a Christmas piece in the United States.

The 47th season Ibermúsica, in which this appearance fits, began last 24 June with the opening concert of the Vienna Philharmonic. Since then, and until May 2017, Programmed Ibermúsica 25 performances 12 of the best orchestras in the world. This is the brand that bears nearly half a century bringing the best music to Spain. The institution, Founded by Alfonso Aijón and co-directed now Llorenç Caballero, It has evolved in line with the times and has managed to preserve the interest in classical music.

This French ensemble was founded in 1979 by harpsichordist and conductor Franco-American, William Christie. Since then, the group has played a pioneering role in imposing on the French musical landscape repertoire hitherto neglected and admired and played too well today: that of the Great Century French and European music of the seventeenth and eighteenth centuries. usually directed by William Christie, he has held since 2007 regularly co-director with British tenor, Paul Agnew.

every season, Les Arts Florissants offer around 100 concerts and opera performances in France. They do it in stages as prominent as the Philharmonie de Paris, where they are artists in residence from 2015-, en el Caen Theater, The Opéra Comique, el Théâtre des Champs-Élysées, el Versailles, as well as numerous festivals. They are an active ambassador for French culture abroad and receive invitations to perform in New York, London, Edinburgh, Brussels, Vienna, Salzburg, Madrid, Barcelona and Moscow , among other cities worldwide.

They have an extensive discography with about a hundred recordings on Harmonia Mundi seals, Warner Classics/Erato y Virgin Classics. In 2013, They launched their own record label, Publishing Arts Florissants, with which they have recorded five albums. Last 4 November was released his latest LP, La Harpe Queen (with the Harmonia Mundi label), along with Christie and renowned harpist Xavier de Maistre. The album is inspired by the music of the harp that prevailed at the French court of the eighteenth century after the arrival of Marie Antoinette of Austria to the country Gallo.

In recent years, They have created numerous training programs for young musicians, como la Academia emblemática Le Jardin des Voix. Likewise, in 2012 pusieron en marcha el festival in the Gardens of William Christie, evento anual one that a artistas de Les Arts Florissants, students from the Juilliard School of Music in New York and finalists of the festival and musical concerts offer rides. The group is supported by the Ministry of Culture and Communication French, as well as the American Friends of Les Arts Florissants.

clavecinista, director, musicologist and professor, is the engine of one of the most exciting musical projects of recent 40 years: Les Arts Florissants. He rediscovered for the public French baroque music, a repertoire neglected to date. Career native east of Buffalo (NY), formed at Harvard and Yale, and installed in France 1971, took a decisive turn when 1979 launched this pioneering initiative. At the head of this set instrumental and vocal, William Christie impuso, both in concert and opera stages, a very personal style musician and showman, renewing the interpretation of this repertoire. In 1987 he met a true public consecration production Atys Lully in the Opéra Comique de París, a production that later also triumphed in many international stages.

Desde Charpentier Rameau, through Couperin, Mondonville, Campra the Montéclair, William Christie is the undisputed master of French lyric tragedy as well as opera-ballet productions, French motets and court music. Likewise, It has been dedicated to European repertoires, contributing to the rediscovery of the works of Italian composers such as Monteverdi, Rossi y Scarlatti. Besides being a great connoisseur and interpreter of the music of Purcell, Haendel, Mozart and Haydn. The extensive operatic career of William Christie has been marked by numerous collaborations with the most renowned stage directors and opera, como Jean-Marie Villégier, Robert Carsen, Alfredo Arias, Jorge Lavelli, Graham Vick, Adrian Noble, Andrei Serban, Luc Bondy and Deborah Warner. His recent projects include two productions at the Opéra Comique in Paris: Plataea (Rameau), in 2014; Y The Venetian Festivities (Campra), in 2015. As a guest, Christie regularly appears in prestigious opera festivals, as well as international operas, as the Metropolitan Opera in New York, the Opernhaus Zurich or the Opéra National de Lyon. Between 2002 Y 2007 He was also guest conductor of the Berlin Philharmonic Orchestra.

Its abundant production record (more of 100 recordings, many of which have won awards in France and abroad) It has been published by Harmonia Mundi seals, Warner Classics/Erato y Virgin Classics, and they reflected the richness of his artistic adventure. His most recent recordings have taken place with the seal Editions Les Arts Florissants: Belshazzar, Le Jardin de Monsieur Rameau, Music for Queen Caroline (a program of religious works of Haendel).

With a long career as a teacher, throughout his career William Christie has been involved in the formation of many of the directors of French baroque ensembles that began in Les Arts Florissants. He taught at the Paris Conservatoire from 1982 until 1995, and since 2007 He has been artist in residence at the Juilliard School of Music. In 2002 Fundo junto Les Arts Florissants the academia Le Jardin des Voix, whose runners are part of a world tour of the grouping leads. Because of his love of gardening, Christie launched in 2012 In the Gardens of William Christie, a music festival that takes place every August in the gardens of Vendée.

William Christie has been awarded the Legion of Honor, the most important recognition of France, así como the Ordre des Arts et des Lettres are the National Order of Merit. Doctor Honoris Causa by the State University of New York, la Juilliard School of Music y la University of Leide (Netherlands). In November 2008, He was elected to the Academy of Fine Arts in France. further, He is Honorary Member of the Royal Academy of Music in London.

In Spain, He was invited between 2008 Y 2010 by the Teatro Real Madrid to lead with stage director Pier Luigi Pizzi's trilogy Monteverdian. He has given recitals at the Arriaga Theater in Bilbao, the Auditorio Nacional in Madrid, Center Auditorium Miguel Delibes of Valladolid (of which are residents since the season 2010/11), Auditorio de Galicia in Santiago de Compostela. In 2011 was a great success in the Prince Felipe Auditorium in Oviedo Chamber Arias and Duettos, by Philippe Jaroussky and Max Cencic. That same year was also celebrated its Pygmalion Rameau at the Palau de la Música in Valencia. In 2015 he led the National Orchestra of Spain at the Auditorio Nacional of Madrid.