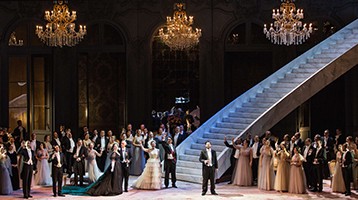 He Palau de les Arts Reina Sofia turn on, until next Sunday 25 of September, the marketing of new season tickets 2016-2017 through its website www.lesarts.com, or in person at the box office.

Prices range from 652,50 Pass euros Shift A in visibility zone 1 and the 219,30 euros of the most economical formats, visibility zone 4, in shifts D, E and F. Payment of Les Arts includes a discount 15% on the original ticket prices if paid in a single payment, or a 10% if fractionated.

further, arts center introduces a new modality in different shifts: fertilizers Mentor-Neo, It is offering an added discount 5% holders (Mentor) to sponsor a young subscriber (Neo) minor 30 years and Youth Card holder, that will benefit from a discount 60%. In this sense, arts center Neo remember that fertilizers are limited to a maximum of 20 localities in turn manure and owners may only renew an extra long season as they remain within the limits stipulated age.

Subscription holders enjoy Les Arts, among other advantages, a number of discounts and promotions buying products and services theater, along with a personalized attention in lockers or periods prior sale for own shows the operatic center.

Likewise, arts center recalls other dates of interest within the season ticket campaign. Until the 18 of September, subscribers may submit their forms and data update, the same day, the deadline to apply for the waiver to season ticket. Monday 19, from 10.00 a 18.00 h, Les Arts record requests and shift change 30 September to 2 October emption requests localities. The documentation for these procedures is available in www.lesarts.com.

Continued sale of passes and tickets for Preseason

On the other hand, Les Arts continues with the sale of passes and locations for the different proposals Preseason. Five shows up the offer with popular prices 2016: operas in the Main Hall "The Elixir of Love", from Gaetano Donizetti, Y "The Wildcat", from Manuel Penella, along with concerts "Gloria and Imeneo", "Sung Cantúria" Y 'New Voices'.

The center maintains lyrical rates this initiative for all audiences, with opera tickets in the Main Hall between 7 Y 50 euros, concerts at the Auditorium 10 a 20 euros, and shows in the Martín y Soler Theatre by 15 euros.

Likewise, passes grouping different proposals are also available from 62 euros in the cheaper version, directed to holders of the Carnet Jove in area 3, until the 150 It is reaching the pass euros for general public area of ​​maximum visibility.

The second Preseason begin 1 de octubre with "L'elisir d'amore", Donizetti, in the assembly Damiano Michieletto He acclimated on the beach of La Malvarrosa, with Keri-Lynn Wilson in the pit. The Spanish opera returns with "The wildcat", the Valencian Manuel Penella, Les Arts program at the centenary of its premiere at the Teatro Principal in Valencia Oliver Diaz as musical director and José Carlos Plaza in front of the stage direction.

The offer is complemented by a monograph Vivaldi under the baton of Fabio Biondi, musical director of The Arts, he 6 October at the Auditorium, with the works "and Imeneo Gloria" and "Gloria". These two proposals are added to him Teatre Martin i Soler: "Cantúria Sung", from Carles Santos, in charge of the Heart of Government, with address Dolores Ricart he 10 of November, and a gala opera artists of the eighth promotion Centre Placido Domingo, 'New Voices', directed by Ramon Tebar, he 26 that month.