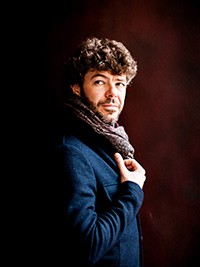 Grenadian Director Pablo Heras-Casado (1977) will debut 30 from January 2016 with the Vienna Philharmonic in the programming of the Week of Mozart in Salzburg (Mozartwoche). The Spanish conductor has been the orchestra's first choice after the announcement of the retirement of Nikolaus Harnoncourt, that he has personally chosen the Spanish musician as his substitute. He will perform with a repertoire dedicated to Mendelssohn - Bartholdy in front of the orchestra as the first Spaniard to do so in the history of the orchestra after Placido Domingo lead her in a dance but not in a concert properly. Heras-Casado is a regular guest at this Mozart party in the cradle of the Austrian genius where in the next edition he will also direct the Camerata Salzburg on the day 26. Before his debut with the Philharmonic, The Granada-born musician will conduct Beethoven's Novena at the end of this month in the New Year's Concert with the Vienna Symphony on 30-31 Y 1 January in Vienna.

The conductor of the year 2014, by Musical America, Pablo Heras-Casado, enjoys an unusually diverse career spanning from great symphonic music to operatic repertoire, alternating interpretations historically well-founded and scores of art. He was appointed Principal Conductor of the Orchestra of St. Luke’s from New York since the season of 2012/13, as well as Principal Guest Director of the Teatro Real de Madrid in 2014.

In 2015/16 he returned to the Philharmonia Orchestra, London Symphony Orchestra, the Orchestra of the National Academy of Saint Cecilia and the Rotterdam Philharmonic Orchestra. He made his debut with the Philadelphia Orchestra, the Israel Philharmonic Orchestra and the Vienna Symphony Orchestra; continued to collaborate with the Parisian Ensemble Intercontemporain, the Freiburg Baroque Orchestra and the Balthasar Neumann Chor & Ensemble. It appears regularly at the Salzburg Mozarteum, where he is invited every year for Mozartwoche.
His projects for this season include opera Rigoletto at the Metropolitan Opera in New York (October November 2015) in addition to ‘I due Foscari’ at the Teatro Real in July 2016.

His recent releases with harmonia mundi include Schumann's Piano and Violin Concertos with Isabelle Faust and Alexander Melnikov.. According to The New York Times it is one of the best recordings of the year while Forbes magazine placed it in their top 10. He also published symphonies of Schubert us. 3 Y 4 with the Freiburg Baroque Orchestra and Symphony No. 2 Mendelssohn with the Bavarian Radio Symphony Orchestra. He has recorded an album for Archiv with the works of Jacob, Michael Jerome y, and an album to commemorate the legendary castrated singer and maestro Farinelli. He has also appeared on the release of Verdi's baritone arias for Sony with Plácido Domingo and on a Deutsche Grammophon DVD of 'Elixir de Amor’ de Donizetti de la Festspielhaus Baden-Baden.

Has Pablo Heras-Casado Medal of Honor of the Foundation Rodriguez Acosta. In February 2012 he received the Gold Medal of Merit of the City of Granada, your natal city, of which he is also an Honorary Ambassador and this November he was named the favorite son by the Diputación de Granada . June 2014 joined the Spanish charity Ayuda en Acción to support the cause of eradicating poverty and injustice from the world.