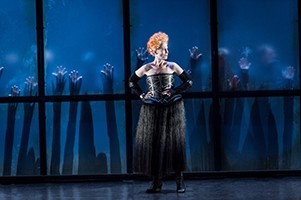 The next Tuesday 22 September the Teatro Real will open its 19th season with Roberto Devereux, from Gaetano Donizetti (1797-1848), belcantisca opera great vocal virtuosity and breathtaking psychological portrait of Queen Elizabeth I of England (Elisabetta), victim of its own despotism in the claustrophobic court, Inbreeding and terrifying Tudor.

Created in an excruciatingly painful period in Donizetti's unhappy life - the composer had lost his parents and wife after the consecutive deaths of their three children -, and with Naples ravaged by anger, the score of Roberto Devereux, filled with rage, grief and despair, would for its author, as he himself confessed, "Opera of emotions". To express them in all their fullness he resorts, once again, to the Tudor court, whose bloody stories, With courtly machinations and unbridled feelings, they had already inspired the plot of three previous operas: Kenilworth Castle (1829), Anna Bolena (1830) and Maria Stuarda (1835).

On this occasion the drama of the opera, served by the libretto of Salvatore Cammarano (also author of the text by Lucia di Lammermoor), privileges the psychological and confessional profile of the queen, trapped by a suffocating web of dysfunctional relationships: her young lover, Roberto Devereux, Earl of Essex, is in love with Sara, Duchess of Nottingham, confidant and friend whose husband is a close friend of the adulterer.

In the wake of Donizetti, the director of the South African scene Alessandro Talevi It reinforces precisely the expression of emotions rampant, Lustful drives and corrosive torments of the impetuous queen, in a destructive spiral dragging the protagonists to its tragic outcome.

Embodying those visceral passions that entangle and suffocate the four characters, a symbolic spider takes shape in the dark and delusional scenery designed by Madeleine Boyd, She also figurines of the opera.

To give voice and soul to the murky relationships of the leading quartet, two casts alternate with some stellar names in this type of repertoire., led by the sopranos Mariella Devia Y Maria Pia Piscitelli, who will embody Elisabetta, and tenors Gregory customer e Ismael Jordi, interpreters of the titular role. They will be seconded by the baritones angel Ódena Y Alessandro Luongo and mezzosopranos Silvia Tro Santafe Y Veronica Simeoni.

Bruno Campanella, great specialist of the bel canto repertoire, who directed last season at the Teatro Real the comical opera Daughter of the Regiment, Donizetti, Now change the register for the interpretation of this lyrical tragedy from the same composer, in which it will be in front, once again, of the Headlines Choir and Orchestra of the Teatro Real.