Rosario Toledo carries the scent of Cádiz to the Teatro Real 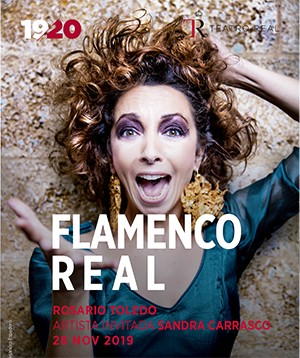 Thursday morning, 28 of November, will take place in the Ballroom of the Teatro Real, a new show of flamenco cycle, in which shine with their own light the dancer from Cadiz Rosario Toledo, in their codes that combines traditional art, with expression forefront, without sacrificing the essence inherited from artists like Charo Cruz, Manuela Carrasco and Antonio El Pipa.

Among the awards he has received throughout his career, They include the National Prize at the Flamenco Art Contest in Córdoba by Guajiras and Tarantos in 1998, The second prize of the Festival de las Minas de La Union 1999; the Giraldillo Award for Best Show at the Biennial of Seville 2012, among others.

At 20:00 hours doors Street Felipe V will open and 20:30 hours attendees will be welcomed with a tasting of a Spanish wine cellar Juan Gil, Real Flamenco collaborator since its launch. The performance will take place at 21.00 hours and at the end of it, viewers who wish may enjoy the company of artists and approach as well, personalized way, the world of flamenco.

Rosario Toledo (Home) Born in Cádiz in 1977. intuitively, fresh, expressive, visceral, earthly. It has managed to be at the top Flemish contemporary thanks to its creativity. He began his career as part of the companies
Manuela Carrasco and Antonio El Pipa, alternating with performances in tablaos, participation in competitions (awarded at the National Flamenco Art Contest of Córdoba and the Festival de La Union) with collaborations as a guest artist in shows with artists of the stature of Javier Latorre, Javier Barón, Antonio Canales, Israel Galván, Miguel Poveda, Archangel,
Dorantes, Mario Maya, what has allowed him to develop a personal vision of flamenco dancing. A deep dance, conceptual, and very creative. In this context, Cadiz is immersed in the development of projects with his own company, obtaining a huge success of critics and fans, and becoming a dancer essential in today's flamenco scene.