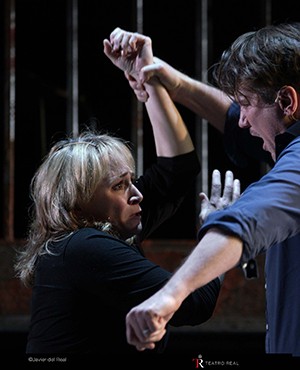 Between days 13 Y 18 February, Y between 26 May and 1 of June, Royal Theatre offer 10 functions from Street Scene (street scene), from Kurt Weill, in a new production at the Royal Theater in co-production with Cologne Operas and Montecarlo.

With this hybrid and marginal jewel of American operatic repertoire, articulating and joins the refinement of the Central orchestration, the magic of Broadway musicals and richness of African-American music, the composer Kurt Weill (1900-1950), German Jew settled in New York, followed in the wake of Porgy and Bess, from George Gershwin, raigambre trying to consolidate an 'American opera', with its uniqueness and own language.

For it was associated with two different profile writers: Elmer Rice (1892-1967), author Street Scene Pulitzer ─premio 1929 and adapted for the screen by King Vidor, in 1931─, Y Langston Hughes (1902-1967), poet, African American novelist and activist attached to the movement Harlem Renaissance, which claimed the black art linked to his roots, traditions and idiosyncrasies.

the first, the dramatist Elmer Rice, Weill receives the great mosaic of lives trapped in a 'cul de sac', which they flow stories of love and hate, slanders and hardship, evictions and abuse, but also of dreams and illusions, friendship and compassion, our likeness History of stairs, Buero Vallejo, but located in the suburbs of New York in the postwar years.

the second, Langston Hughes, composer received a booklet with a great multiracial prosody, texts to the rhythm of jazz, with inflections, accents and jargon that define each of the nearly forty characters that populate the busy New York street.

With this dramaturgical material as rich, Kurt Weill, already naturalized US citizen with extensive experience in the composition of lyric repertoire ─musicales, operas, songs and music escena─ decides to go further, creating an opera that spoken parts, arias, duos, set numbers, dance and songs flowed intertwined, articulating several overlapping stories with refined orchestral writing, effective and concise, inheritor of European tradition, but contaminated by all the musical influences of his time on both sides of the Atlantic.

The opera premiered on Broadway, at the Adelphi Theater, in 1947, conquering the Tony award for best original score in the first edition of these awards, since then they have grown in prestige and popularity.

But nevertheless, the mestizo character of this 'opera Broadway', which it requires a huge cast of great diversity, choirs and orchestra, the work has moved away from both the musical theaters and temples of opera, placing the Street Scene in limbo which begins to free.

The Royal Theater will play, Finally, this unspeakable work, estrenándola in Madrid with stage director John Fulljames, current director of the Royal Danish Opera, He addressed Street Scene an award-winning production of small format premiered in London in 2008 and could be seen in Barcelona 2013. This time, its renewed conception of the opera will feature scenery and figurines Dick Bird, that recreates the atmosphere of the opera based on graphic documentation of the years 40 New Yorkers, strengthening its naturalistic component.

Tim Murray, returning to the Royal Theater after his interpretations of Porgy and Bess in summer 2014, It will lead more than one hundred performers versatile voice and theater, led by soprano Patricia Racette ─ which debuts on paper and in the Real─ Theater; Brazilian baritone Paulo Szot ─asiduo on posters Broadway, who gave a concert at the Royal last season-; the tenor Joel Prieto ─Tamino in The magic Flute Film directed by Barrie Kosky in Real─ Theater and British soprano Mary Bevan.

The Royal Theater will be filled with jazz rhythms, de swing y de blues, bringing its new production worldwide through editing a DVD and audiovisual recording is distributed internationally.