The Royal Theatre, nominated for the International Opera Awards 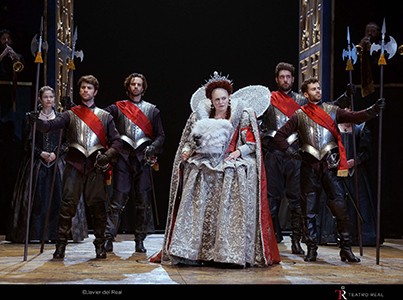 He Teatro Real It has been nominated for the International Opera Awards 2019 in the category from Best New Production by Gloriana, from Benjamin Britten, whose stage direction he was in charge of David McVicar, who was assisted set designer Robert Jones and costume design Brigitte Reiffenstuel.

In the last edition, Teatro Real was the award winner in the same category with Billy Budd, Also the British composer, directed by Deborah Warner scene, and he earned three more nominations for Best Choir, Better recovery of a Work (Bomarzo, Alberto Ginastera) and Best Opera Company.

Gloriana, It premiered at the Teatro Real 12 April 2018 in co-production with the National Opera Inglés and Vlaamse Opera (opera Flamenca) Antwerp, with musical direction Ivor Bolton, and scenic David McVicar. Production attended an extraordinary cast led by double Caterina Antonacci and Alexandra Anna Deshorties, in the role of Queen Elizabeth I, and Leonardo Capalbo and David Butt Philip, como Robert Devereux. Joining them were the Choir and Orchestra Headlines the Royal Theater and the Little Singers of JORCAM.

McVicar places the Queen in the center of a palatial corrupt and hypocritical world, it controls with an iron, to the same extent that it is carefully guarded by subjects and courtiers, in a Europe immersed in religious strife and territorial. Elizabeth moves in the refined and conceptual scenery Robert Jones, which emphasizes the acting work of interpreters, and the rich Elizabethan costumes designed by Brigitte Reiffenstuel, inspired by paintings from the National Gallery in London, which assumes an almost theatrical character.

Just a few days ago the Royal Theater getting two awards at the first edition of the Opera XXI Awards with Goriana, in the category of new operatic production, Y The soldiers, by stage director Calixto Bieito by.