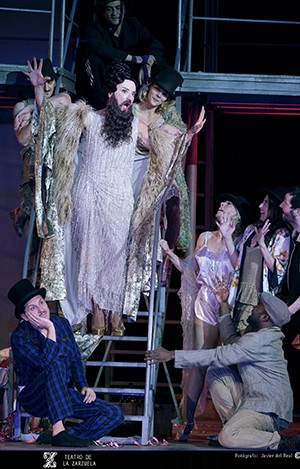 Ricardo Llorca It took three years composing 'Three hats', amazing zarzuela based on the Miguel Mihura comedy whose European premiere welcomes of the 12 al 19 November Theater of Zarzuher in a new production. Accredited teacher in the world Juilliard School in New York, city ​​in which it resides for more than 30 years, Llorca is a meticulous composer, demanding, rigorous with their own work and unconventional. Zarzuela music we now propose is full of catchy tunes with a harmony that will engage the audience from start to finish, where the composer "makes incursions into languages ​​and techniques more contemporary, yes, most of the time for dramatic purposes', as indicated by the scholar Antonio Gómez Schneekloth. And will also be a lucky, unfortunately not too common, Back to indulge in one of the best texts of Mihura, that memorable playwright ahead of his time, precursor in Spain of the theater of the absurd and never sufficiently valued.

The podium of the pit will occupy for the first time in this theater teacher Diego Martin-Etxebarria, senior director in Deutsche Oper Chemnitz, whose distinguished career has focused mainly on international stages. These functions will be at the front of the Titular Orchestra of the Teatro de la Zarzuela, Community of Madrid Orchestra, Holder Choir of the Teatro de La Zarzuela and an extraordinary cast. For Martin-Etxebarria, the score of Ricardo Llorca has every incentive: "This is a score very original -inspired by the Neapolitan folklore and southern Italy-, very demanding for orchestra, with much metal, percussion and riquísima rhythmic structure, reminiscent of the circus music and some curiosities as an instrument rarely heard in opera houses such as the accordion ".

The new production of the Teatro de la Zarzuela 'Three hats', commissioned and published by the New York Opera Society and premiered at the Teatro Sérgio Cardoso de São Paulo 2017, will feature always unexpected and lucid staging of José Luis Arellano, for whom the theater Mihura was from the first a magical source of fascination: "Those women motherless, those madmen behind those dancers, humor that was so near and above all, the simple poetry hidden under all that routine vulgar and tremendous ". Y it moves to the stage, now, in a very special way: "Once again we raise the curtain to tell this story again, perhaps in a different way. he is accompanied veiled whisper music Ricardo with the same passion and the same vertigo of those jugglers throwing their objects with hope and rigor they fall back into their hands ".

Arellano those words that define MM what is not seen but there. but excited. And it will also have a lot to see extraordinary voices of each singer, arts compelling actors.

The artistic cast of Three hats is formed by tenor Jorge Rodríguez-Norton, This past summer has become the third Spanish in 143 he made his debut in the Bayreuth Festival (He did with 'Tannhäuser', and the last two were Placido Domingo Y Victoria de los Angeles), will play the role of Dionisio endearing, Paula finds in-a funny dancer played by the young virtuoso soprano Rocío Pérez–, a different and happier way of seeing the world. the tenor Emilio Sánchez and baritone Gerardo Bullón Don will act as Rosario and Don Sacramento, Episodic two characters that allow prop up the story of Dionisio both the beginning and at the end. the tenor Enrique Viana, as usual, He will not leave anyone indifferent to his hilarious interpretation of Madame Olga, the bearded lady from the circus. the soprano Irene Palazón and mezzosoprano Anna Goma, also they give life to Catalina dancers and Valentina, Paula friendly and always willing to have fun.

Along with the singers and the choir, will occupy the stage 12 actors among which will be Boré Buika (Buby Barton), Marco Covela (The German Strongman), Andres Felipe (Mr. Garibaldi), my Ceballos (The Cunning Hunter) O Chumo Mata (Ancient Military). Likewise, participate in the assembly four solo musicians (fiddle, trumpet, piano and accordion), three of them on stage and one in the pit.

The scenery Ricardo Sánchez Cuerda changes every moment of reality as in a magic trick, what inspired genius contribute your wardrobe Jesus Ruiz, lighting of the National Theater Award Juan Gómez-Cornejo and choreography Andoni Larrabeiti.

As is customary in healthy productions presented by the Teatro de la Zarzuela, the role of the Wednesday 27 of November will be issued live in streaming through sites Facebook Y YouTube of the theater, and its Web page. Equally, the role of the Saturday 16 of November It will be recorded by Radio Clásica de RTVE to issue in the near future.

Metaphor of the three-legged stool

One of the reasons that will make three hats a compact whole, is the musical empathy between Ricardo Llorca and Diego Martin-Etxebarria. The latter indicates that to explain his conception of music you like to use metaphor for the three-legged stool, "Which in this case would be melody, rhythm and harmony. In the classical period these were relatively simple but robust. From Hence the music has evolved wonderfully stylizing, blurring or enhancing some of them. The problem with the most avant-garde language says the schoolmaster is that Some composers have made these legs disappear, leaving us without stool”. A) Yes, considers that Ricardo Llorca follows the trail of the great composers: "Da innovative ways the pillars supporting the structure according to the dramatic needs, but remains recognizable to not 'fall from the stool' ". Martin-Etxebarria this means the public "will have melodies that can whistle; riquísimos rhythms, some even catchy; and a harmony that underpins the musical discourse through a brilliant orchestration”.

In addition to the 7 representations, the Teatro de la Zarzuela has organized a series of activities around the work of Llorca: