A “mafic flute” Film returns to the Royal Theater 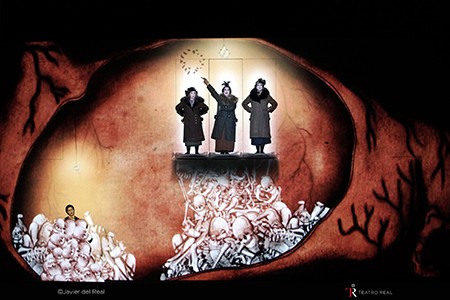 He Teatro Real will begin the new year with the replacement of the dazzling production The magic Flute, from Wolfgang Amadeus Mozart, conceived by Suzanne Andrade, Paul Barritt y Barrie Kosky, presented with great success in your scenario January of 2016.

This time will be offered 13 functions, between 19 January 24 February, again with the musical director of Teatro Real, Ivor Bolton, to the front of a double deal, of the Headlines Choir and Orchestra of the Teatro Real and Little Singers of JORCAM.

The success of this scenic and dramaturgical proposal lies in its enormous facility to communicate with the public, your mood, the waste of creativity and complicity with the viewer through a visual universe in which the characters mozartianos two centuries ago come to the public concerning converted naturally into as close to us as a heartthrob Rudolph Valentino type (Tamino), a seductive pert as Louise Brooks (Pamina), an evil like the terrible Nosferatu (Monostatos), or laughing, torpe e ingenuo Buster Keaton (Papageno)…

The absence of a traditional decorated, a 'virtual scenery' reduced to the presence of a screen on stage, requires singers to act with a huge concentration, acting talent and synchronized movements, they should have the freshness of the gag and clockwork precision in coordination with the projection of the drawings.

In the pit she will be the musical director of the Royal Theater, Ivor Bolton, expert in the work of Mozart and head between 2004 Y 2014 from Orchestra of the Mozarteum in Salzburg, where he has spent more than 10 years to the interpretation of the classical repertoire in the birthplace of composer.

Bolton will lead the Headlines Choir and Orchestra of the Teatro Real, one of the most popular operatic titles, which will be presented for the fourth time in the Teatro Real reopened after having done so in January 2001 (Frans Brüggen / Marco Arturo Marelli), July 2005 (Marc Minkowski / La Fura dels Baus) and January 2016, with the same production.

Coinciding with functions The magic Flute The Royal Theater has organized a series of Parallel activities related to Mozart's opera and the silent films of the year 20 which he inspired the drama and stage production proposal that will be seen on its stage.

Functions The magic Flute They are sponsored by the BBVA Foundation as part of its program of Music, which it is conceived as a complete tour of the various ways in which society can benefit and enjoy this art.