A new production of Falstaff, de Giuseppe Verdi, at the Theatre Royal 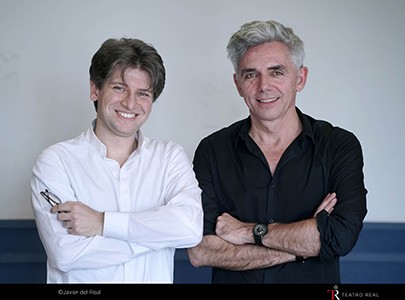 The next 23 of April Royal Theater debut a new production from Falstaff, from Giuseppe Verdi, in co-production with the Théâtre Royal de la Monnaie in Brussels, the Opéra National de Bordeaux and Tokyo Opera Foundation Nikikai ─teatros where posteriormente─ be presented and the company NEOescenografía SL.

The opera, which will be staged until 8 May ─11 features double reparto─, It will be broadcast live on 2 May the TV channel Half and delayed by The 2, de RTVE. Likewise, The recording will be available on the stage Digital the Royal Theater and will be released on DVD with international distribution.

Arrigo Boito ─compositor, poet and playwright who had attached his name to Shakespeare and Verdi Otello─, interweaves and merges Shakespearean scenes and characters in a script all in verse, which is itself a literary work. The author uses phonics and inflections of archaic Italian service comedy, drinking from the Elizabethan theater, of one of Moliere Goldoni, interspersing quotes from Shakespeare or quotes from Boccaccio and playing extensively with the metric for different situations: pentasyllabic for amorous raptures, hexasyllabic to the taunts of the gossips, octosílabos for Falstaff chases, the double septisílabos to sus monologues, all it combined with enormous skill and dramatic effectiveness.

The vast theatrical wealth, semantic and poetic libretto is carefully adjusted to the score of Giuseppe Verdi, it recreates articulating small melodic cells, tonalities, details instrumentation, and timbres associated with characters and dramatic situations harmonies, with fluency, amazing complexity and freshness. Breakneck music takes us from youth to old age, from reality to dream, the sweetness to anger, from laughter to reflection, mocking or pitying characters, or joining their fears, laughs, the feathers devaneos.

Laurent Pelly, acknowledged master in directing actors, in the Teatro Real he has won three funniest comedies ─The Daughter of the Regiment, de Gaetano Donizetti (2014), Hansel and Gretel, The Engelbert Humperdinck (2015), Y The Golden Cockerel, of Nikolai Rimsky-Korsakov (2017)─, returns this time to direct a new production of Verdi's masterpiece in which, once again, He is also the author of the figurines.

In his conception of the opera, whose action moves to our time in a schematic scenery, 'Organic' and mutant designed by Barbara de Limburg, Laurent Pelly deepens inside the characters, on a metaphysical journey in which the limits of farce and comedy fade, to enter the magical realm of enchantment and fable.

Endiablada Verdi's score will be led by Daniele Rustioni, music director of the Opera de Lyon, de la Orchestra della Toscana y de la Ulster Orchestra (is, from September), with a brilliant career international, which will debut at the Teatro Real after triumphing in the most important opera theaters around the world.

Falstaff It will be presented on stage at the Teatro Real after 17 year absence: in 2002 eight functions of the iconic production of La Scala in Milan conceived by the stage manager offered Giorgio Strehler, and then died, as a tribute to his brilliant career.

The fat braggart vividor return to have fun with our sorrows, redeem us from our miseries and lead to a better world, more tolerant and smiling, from which "everything is a joke".

On the occasion of World Book Day, Museum retrieve the versions Charles Y Mary Lamb they did in the nineteenth century tales Shakespeare.

Everyone to the Gayarre!: music workshops for the whole family, direction and presentation Fernando Palacios.

Opera exposed: The witty and sarcastic Falstaff serve as an excuse for detailed everything surrounding an opera production. essays, technical views and experience firsthand an unforeseen opera premiere, are some of the attractions of this unique workshop.

The television channel Half retransmit Falstaff live for everyone.

The 2, TVE will broadcast the opera delayed on date yet to be determined, before its DVD release with international distribution.

Until the 17 May at 19 hours | International Institute, Assembly Hall

Film Series: Orson Welles: Master Storyteller.
With the support of the US Embassy. in Madrid
26 of April: The Stranger
3 of May: Mr. Arkadin
10 of May: Touch of Evil
17 of May: F for Fake